Road traffic pollution is associated with a higher risk of death for people living with bronchiectasis, a study has found.

Presenting their findings to the European Respiratory Society (ERS) Annual Congress in Barcelona this week (September 8), researchers concluded that living near a busy road was more likely to exacerbate the disease. 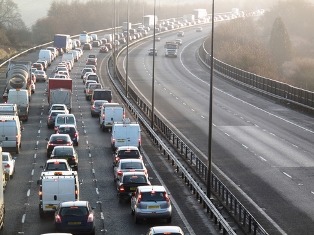 Bronchiectasis, a condition in which the airways of the lungs become abnormally widened, leading to a build-up in excess mucus, can be caused by cystic fibrosis (CF). However, experts often categorise the condition as CF and non-CF related.

The study investigated the link between the number of deaths in a group of 189 sufferers of non-CF bronchiectasis and their residential distance to a main road, between June 2006 and October 2012.

Using hazard ratios to estimate risk of death, the findings showed participants were less likely to die from the disease the further they lived from a major road, with a hazard ratio of 0.36 for every tenfold increase in distance to the thoroughfare.

The conclusions gathered by the investigation are the latest in a growing body of evidence demonstrating the adverse effects of roadside pollution.

Pieter Goeminne, lead author of the investigation, hoped the findings would help policymakers to identify risks when considering proximity of infrastructure in future.

He said: “Our results are the first to link air pollution with the risk of death in people with bronchiectasis and adds to a number of other studies showing the dangers of living close to a busy road. The findings of this study should encourage policymakers to make air quality a key focus of transport policies and consider the proximity of main roads to residential areas.”

European Respiratory Society president, Professor Francesco Blasi, said: “This study has added crucial evidence to our understanding of how living close to a busy road can affect people with poor lung health. The European Lung White Book provides several key recommendations to help policymakers address this issue and I would call on EU Member States to make air quality an integral part of their transport policies.”