The Royal Botanic Garden in Edinburgh (RBGE) has published an air-quality self-assessment package aimed at improving people’s knowledge about clean and polluted air.

Organisms called lichens are according to the RBGE ‘excellent indicators’ of environmental health and local air quality. A lichen is a composite organism that comes from algae or cyanobacteria or both living among filaments of a fungus in a symbiotic relationship. 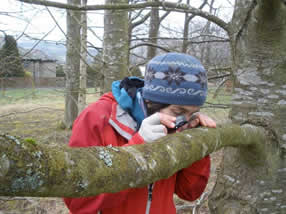 The kit according to the RBGE can be used by individuals, schools and community groups to investigate the evidence for and against polluted air.

All information delivered from the survey will go to the Edinburgh Living Landscape initiative.

Frances explained her involvement in the project. She said: “I wanted to start communicating more widely and in new ways about the need to protect the environment and this led me to a full time three-year BSC in Countryside Management at Aberystwyth University.

“During my training I was increasingly aware of a barrage of reports on air pollution, including the worrying statistic that outdoor air pollution contributes to 2,000 deaths annually in Scotland according to the NHS: Health Protection Scotland briefing paper 2014.”

John McFarlane, TCV environment development officer, added: “Air pollution is a huge global environmental health issue and while the air quality in Scotland is generally very good, we do have hot spots in our cities that regularly exceed national and EU limits for air pollution. If members of the public can be enthused and encouraged to participate in finding out about their local air quality we can start to make a real difference.”