A fleet of 30 ‘bio-gas’ double-decker buses will take to the road in Nottingham from this summer, following a £17 million investment.

The buses, which are powered using gas produced by anaerobic digestion of food waste and sewage, with a reported reduction in NOx emissions of around 36,000 kg across the city’s bus fleet according to Nottingham City Transport (NCT). 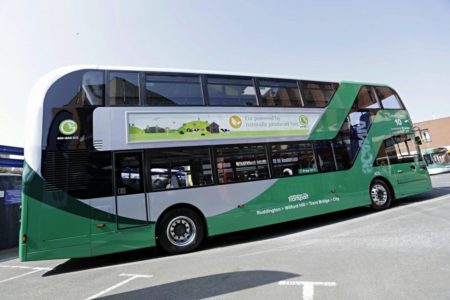 The engines and chassis the Enviro400CBG City vehicles have been developed by Swedish firm Scania and are bodied in Britain by Alexander Dennis Limited (ADL).

Commenting on the new fleet NCT Engineering Director, Gary Mason, said: “We are hugely proud of our new bio-gas buses. This is the largest order for gas double decks in the world and is the culmination of our extensive research into alternative fuels.

“Bio-gas is produced naturally through anaerobic digestion, using food waste, farm waste and sewage. The methane emitted from the digestion process is captured, treated and turned into fuel. When this fuel is used, emissions are 84% lower than their diesel counterparts, thereby making them – from ‘Well-to-Wheel’ the greenest buses on the road.”

Tony Tomsett, bus, coach and engine sales director for Scania (Great Britain) Limited added: “Nottingham City Transport has a long-standing reputation for innovation and is once again leading the way with these vehicles, which represent the world’s largest ever order for bio-gas-fuelled double-deck buses.

“We now look forward to working with the Nottingham team to ensure the city realises the maximum environmental and operational benefits offered by these vehicles.”

Richard Matthews, sales director at ADL, commented: “We’re delighted to partner with NCT and Scania on this significant order which responds to the city’s requirements to improve street level air quality, while delivering a first class on-board experience for passengers.

“We’ve seen the increase in bus ridership our Enviro400 City styling and enhanced interior specifications bring – USB power sockets, comfortable seats and a bright, airy environment from the increased glazing all add to the premium feel which we know passengers appreciate.”