At 8am on 20th June 2019, myself and twenty members of Extinction Rebellion became rebels when we stepped into a road in London and blocked A3 traffic for two hours.

The action was to demand the government acts on the climate and ecological emergency but also to highlight an opportunity to significantly reduce air pollution on the UK’s most congested roads by gating traffic.

Armed with leaflets and cake, half of the group engaged drivers to apologise for the disruption, reassure them that stopping for 4-6 minutes would not increase their journey time and to ask them to switch off their engines whilst they waited.

Some drivers were extremely supportive of the action whilst others were angry at the perceived delay to their journey.

Two motorists tried to mount the pavement and bypass the protesters but were swiftly dealt with by the police officers present.

My most memorable interaction from the day was with a grandmother taking her two grandchildren to an appointment.

The infant and toddler were asleep in the back seat and grandma was not happy when we entered the road just in front of her car. She immediately said, ‘no, no, no, please let me through, I cannot be delayed, I have an appointment to get to.’

I spent the next five minutes crouched down next to the driver’s window talking to this loving grandmother. At one point I asked for the protest banner to be lowered so that she could see the rear lights of vehicles ahead, understand that in a few minutes she would once again be behind their exhaust pipes.

It was when I told her that diesel engine exhaust is carcinogenic (group 1) and levels can be 9-12 times higher inside the vehicle that she switched off the engine and paid more attention to the 10 facts on the flyer I handed to her.

By the time we walked out of the road, she gave the biggest smile and wave of the day. This drove home the truth about the lack of public awareness of this national health emergency.

Drivers are unknowingly poisoning themselves and their passengers. People who would not dream of smoking inside a car with children sit in idling traffic breathing exhaust fumes, that like tobacco smoke, cause cancer in humans.

The lungs of young children are being irreparably damaged and the government has avoided its responsibility to inform the public. 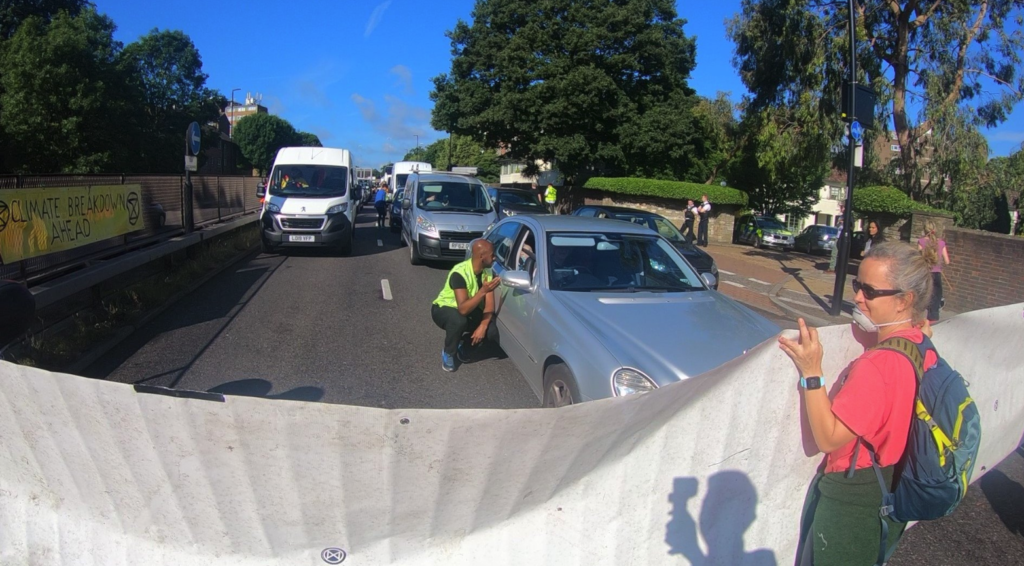 Transport for London (TfL) is responsible for the most polluted roads in London. During peak times vehicles can accelerate and brake 40 times and idle for 12 minutes to drive what should be a 2-3 minute mile.

TfL tell us that idling produces almost twice the emissions as a moving vehicle.

Holding traffic and asking drivers to switch off their vehicle engine and wait till the road ahead is clear to drive on, can potentially reduce rush hour emissions by 70% on some of London’s most congested roads.

I have been pleading with the Mayor of London and TfL to pilot this pollution solution on West Hill in Wandsworth for over a year and on Clean Air Day we showed just how simple and effective gating on West Hill can be.