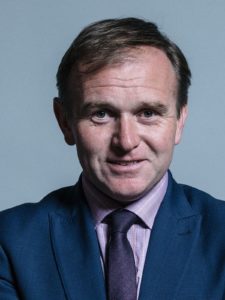 The MP for Camborne and Redruth is the current farming and fisheries minister and has had a long-standing association with Defra, going back to 2013 when he was a Parliamentary Under-Secretary.

Eustice, who comes from a farming background, is seen as a favourable appointment within the agriculture sector. He was a junior minister at Defra from 2015 until February 2019, when he resigned in protest against Theresa May’s Brexit position.

He was re-appointed the day after Boris Johnson became Prime Minister and has helped the department prepare for Brexit.

Speaking to the Guardian in 2016, Eustice said leaving the European Union would free the UK from ‘spirit-crushing’ green directives.

According to the website, They Work For You, Mr Eustice has ‘generally voted against measures to prevent climate change.’

In a statement, she said: ‘What the Prime Minister giveth, the Prime Minster taketh away. Just over six months ago, I was delighted to be invited by the Prime Minister to return to government after three years on the backbenches. This morning he told me that I needed to make way for someone new.