The UK’s carbon dioxide (CO2) footprint has continued to fall since 2005 according to new data released by Defra for 1990-2009.

But, the figures from the Department for Environment Food and Rural Affairs and issued on March 8 2012, suggest that over 1990-2009 levels of other greenhouse gases rose by 12%.

The data, produced by the University of Leeds for Defra, shows that between 2008 and 2009, the UK’s carbon dioxide footprint fell by 9 per cent.

Defra said the fall “follows a steady rise of 35 per cent between 1995 and 2005, leaving the footprint in 2009 some 20 per cent higher than it was in 1990. Over the whole period, carbon dioxide emissions relating to imports doubled and emissions relating to the consumption of goods and services produced in the UK decreased by 10 per cent.”

The carbon footprints reported relate primarily to carbon dioxide emissions and the Department explained that the separate estimates of the total greenhouse gas (GHG) emissions should be seen as “experimental”. And, the footprint relates to private motoring by UK residents and from the spending on goods and services produced in the UK and overseas – meaning wherever the emissions actually arise.

Since 1990 the UK economy has moved away from manufacturing to being more of a services sector so more goods and services are made overseas. 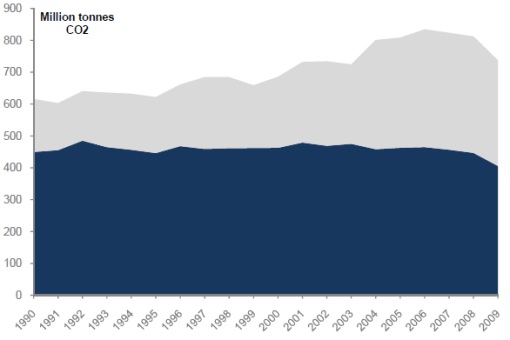 And reflecting the importance of data relating to overseas production, a statement from Defra accompanying the data warned: “Inherently the emissions relating to overseas production of imports to the UK are not as easily measured as emissions generated within the UK borders. There are general conventions on how to do this, using shares of production based on financial data, but the results cannot be viewed as being as robust as the estimates of carbon emissions generated domestically.”

The chart shows the trends in CO2 emissions associated with imported goods and services represented about 27 per cent of the CO2 footprint in 1990 but this figure has now risen significantly to 45%.

The Department also reported that there has been a 10 per cent fall from 2008-2009 due mainly to a reduction in emissions from power stations as a result of less demand and also in part due to an increase in the use of nuclear power. There was also a reduction in heavy goods vehicles emission and a “noticeable fall in emissions form construction activity”.

The absolute amount of emssions generated directly by households has, said Defra, remained “relatively constant” at 139 million tonnes (mt) of CO2in 1990 and 140 mt in 2009. In this category emissions from heating decreased while emissions from private motoring increased.