London residents will soon be able to get a more accurate picture of what air quality is like in their area with the launch of an updated London Air iPhone App later this week.

The App, which has been developed by the Environmental Research Group at King’s College London, was originally launched in March 2010 and currently has around 6400 subscribers. Users can get hourly air pollution notifications, taken from over 100 monitoring sites in the London Air Quality Network, as well as health advice. 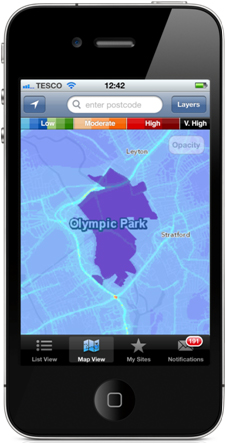 The updated London Air iPhone App will include Olympic venues

The update to the App was announced at the London Air Quality Seminar at King’s College on Thursday (June 28). It aims to give subscribers a more detailed idea of pollution levels in London, by adopting a new mapping system that displays data in a more user friendly way.

The new version will include ‘Nowcast maps’, which show up-to-date forecasts of pollution levels in the city, based on readings taken from monitoring stations every hour with the government’s Air Pollution Index. The results are displayed on a colour-coded map showing where pollution is likely to be highest.

The current version plots air quality readings at specific points around monitoring stations in London as dots on a map, but by using the Nowcast mapping tool it is hoped that users will get a more accurate picture of what air quality is like in their area.

As measurements from monitoring stations are only able to report air quality at that particular location, nowcast combines these measurements with a detailed air quality model to show a prediction of what air quality is like across the whole of Greater London.
The map has also been updated to include ‘points of interest’, including venues to be used in the Olympic Games.

Speaking at the Seminar, Andrew Grieve, senior air quality analyst at KCL’s Environmental Research Group explained that the latest upgrade had also been designed to make it ‘more interactive’ for users.

He said: “You can now zoom all the way out to view the whole of London, or focus on a particular junction from up to 20 metres, and we’ve got hourly and annual maps, as well as the ability to plot points of interest on the map.”

An updated version of the App on the Android platform will also be made available shortly.