Human activities are the main cause of poor air quality, but natural sources of air pollution also play a role, according to a new study from the European Environment Agency. 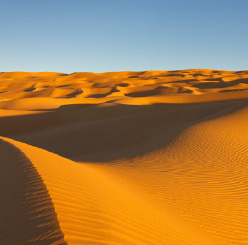 Desert dust is one of the most common causes of particulate matter in Europe, according to the study

It is the first evaluation of Member State reporting under the EU’s Air Quality Directive. The Directive sets legally binding limit values to improve air quality.

However, countries can subtract the pollution from natural sources, as they are only obliged to reduce man-made air pollutant emissions. So the report also includes European Union (EU) Member States documentation of natural contributions which led to exceedances of air quality limit values set by EU legislation.

It is difficult to calculate the exact amount of pollutants emitted from natural sources, the report notes, but in many countries the contribution to particulate matter levels in the air can be significant.

The most common natural sources of particulate matter in Europe are desert dust, volcanoes, forest and grassland fires, and salt from sea spray. The particular source of pollution can be identified using various methods including chemical analysis of particles sampled from the air, meteorological data satellite measurements and modelling.

“Poor air quality from natural sources is by definition outside of our control,” European Environment Agency (EEA) executive director Jacqueline McGlade said. “But this analysis shows that authorities should make extra efforts to reduce the air pollution they can control, because the cumulative effect of natural and man-made particulates can damage people’s health.”

‘African dust’ from the Sahara is the most common natural source of particulate matter in the air. In the Western and particularly in the Eastern Sahara rainfall is extremely rare and irregular. Temperatures can rise above 50° C during the summer months. Extremely dry and hot conditions create turbulence during the day which can propel dust upwards to a height of 4-5km. Such turbulence is usually followed by meteorological stability during the night. Particles can stay at these heights for weeks or months, and are often blown across Europe.

Sea spray is also a source of particulate matter, and can contribute up to 80 % of particle levels in the air in coastal areas. This is mostly salt, whipped into the air by strong winds.

The sudden eruption of a volcano, for example on Iceland or in the Mediterranean, also has the potential to produce transient peaks of airborne particulate matter in Europe.

Forest and grassland fires in Europe burn an average of almost 600 000 hectares of land per year, a significant source of air pollution. It is difficult to determine whether these fires are truly ‘natural sources’ – the report notes that approximately nine out of 10 fires are caused directly or indirectly by humans, for example by arson, discarded cigarettes, campfires  or farmers burning crop residues after the harvest.