New rules to allow vehicle manufacturers to develop more aerodynamic lorries to reduce fuel consumption by 7-10% and help to cut traffic emissions have been proposed by the European Commission.

Vice-president and commissioner for transport Siim Kallas announced the proposals in Brussels yesterday (April 15), as part of plans to update the specifications for heavy goods vehicles (HGVs) in order to take account of technological developments. The specifications are outlined in a Directive (96/53/EC) that dates back to 1996. 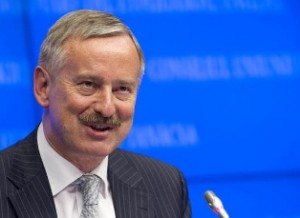 Siim Kallas, Commission vice-president, has outlined proposals that would see more aerodynamic lorries on the roads

The proposals will allow lorry cabins with a rounded shape and for the use of aerodynamic flaps at the back the trailer, which the commission said would save approximately £4,264 per year in fuel costs for a typical long-distance lorry covering 100,000km.

This would represent a 7-10% cut in greenhouse gas emissions, or 7.8 tonnes of carbon dioxide for the same long-distance lorry covering 100,000km.

A lorry driver’s field of vision would also be improved, which it is estimated would help to save the lives of 300 to 500 vulnerable road users, such as pedestrians and cyclists, each year.

According to the commission, up to a third of controlled vehicles are overloaded, which causes damage to roads, increases fuel consumption and is estimated to cost the European taxpayer £810 million. As a result, the commission is proposing on-board weighing systems linked to weigh-in stations on the main roads to allow more consistent weighing controls from country to country.

Mr Kallas said: “A brick is the least aerodynamic shape you can imagine, that’s why we need to improve the shape of the lorries on our roads. These changes make road transport cleaner and safer. They will reduce hauliers’ fuel bills and give European manufacturers a head-start in designing the truck of the future, a greener truck for the global market.”

He also claimed that the development of new aerodynamic cabins would support job creation and economic growth in Europe.

He said: “European lorry manufactures are leaders in the world market. Together with the road freight transport companies, they employ more than 6 million people. The sector is a major investor in research and development. There are 6.5 million lorries on Europe’s roads. At least one million regularly travel long distance and could take advantage of these new measures for aerodynamic reasons. That will support European job creation and economic growth. But all vehicles can benefit from the new measures from a safety point of view.”

The current proposal must be adopted by the European Parliament and EU member states before becoming law, meaning that the new trucks could be expected to be seen on the roads by 2018-2020.