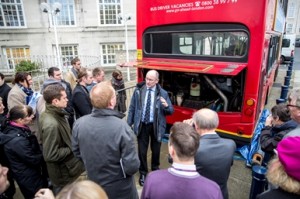 However, head of retrofit engineering at Eminox, Steve Rawson explained that Selective Catalytic Reduction Technology (SRCT) fitted to older buses can be more effective than newer Euro 5 standard buses – and in some cases even as good as Euro 6 standard buses.

His comments came at a clean bus technology briefing at Maidstone borough council in Kent yesterday (December 16), at which attendees were given an overview of bus retrofitting systems developed by Eminox. They were also given the opportunity to view the relevant parts of a retrofitted London bus.

According to Mr Rawson, around 15 older buses can be retrofitted for around the same cost as purchasing one new bus, although the systems need to be durable as buses in the likes of London are running for around 20 hours a day.

He said: “People are always surprised when we tell them that retrofitted Euro 3 buses are better than Euro 5 buses in terms of NO2 emissions.”

Mr Rawson worked with Transport for London (TfL) to retrofit more than 600 buses with Eminox technology, which he said had reduced NOx emissions by 88%, nitrogen dioxide emissions by more than 50% and particulate matter by more than 90%.

He said that TfL had placed an NO2 reduction target of 50% on retrofitting technology, which was tough to achieve.

The event was organised as Maidstone borough council recently received £150,000 funding from the Department for Transport (DfT) to retrofit a number of buses in its fleet. As a result, the council is seeking tenders from retrofit developers such as Eminox to help limit emissions from its buses.

Also speaking at the event was environmental manager for transport emissions at Transport for London (TfL), Finn Coyle, who agreed that that retrofitting Euro 3 buses were often the best solution for reducing emissions. 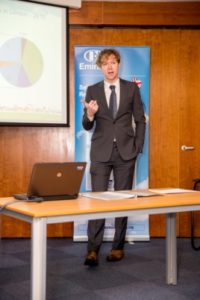 But, Mr Coyle also said that some retrofit emissions reduction systems focused on reducing oxides of nitrogen produced during combustion (NOx – a generic term for the gases nitric oxide and nitrogen dioxide), but that these systems could in fact result in a slight increase in emissions of nitrogen dioxide.

He said: “Unfortunately, because of the chemistry, there is the potential for SCRT fitted to new buses to actually increase NO2 from the exhaust system. Systems need to be developed for NO2 reduction rather than a NOx reduction.”

Mr Coyle added: “It is a real challenge to provide that important public service but also to protect people’s health.

He added: “I think Putney High Street is actually the worst in Europe for NOx – it is worse than Oxford Street in terms of congestion.”

He said two electric buses from China were also set to be launched in the capital this week, while hydrogen fuel cell buses were part of the “long-term strategy” for TfL, with each costing around £1 million.

He said he expected a 20% reduction in NOx emissions on the London bus fleet over the next three years, with a reduction in CO2 also expected.

Jim Collins, fleet manager at train and bus operator Go-Ahead – which worked with TfL and Eminox on retrofitting buses in its London fleet – told attendees that it was important to look at retrofitting buses as new Euro standards only affect any new buses being rolled out.

He said: “To have any immediate impact on our bus fleet we need to look at retrofit technology.”

He added that Go-Ahead also operates fleets in Oxford, which is set to introduce a Low Emission Zone (LEZ) in January 2014 – the second city in the UK to do so after London.

Mr Collins added: “We have 15-year bus lifecycles, while legislation requirements focus on new buses, so they won’t impact on us much. We therefore need to look at other ways of reducing emissions, which is where retrofitting comes in.”

This is really interesting. Could anyone point me towards some published data showing a comparision between measurements of Euro 3 buses before and after retrofit, as well as a comparison with later Euro standard buses?