Exeter city council is currently producing a low emissions strategy to reduce the impact of local transport on air quality, which it hopes to have ready for public consultation next month.

The proposed strategy aims to tackle nitrogen dioxide levels by reducing emissions from the council-owned fleet, as well as working with local businesses and organisations to increase low emission vehicle uptake and sustainable transport choices. 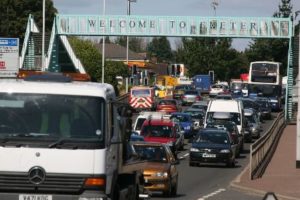 Making up part of the council’s existing Air Quality Action Plan, the council is considering a number of traffic measures to include in its draft low emissions strategy in September.

According to the council, measures to boost air quality in the future strategy could include: fitting buses with emission reduction technology; changing the way deliveries are made in the city; helping people switch to less polluting transport methods, and; encouraging wider use of electric vehicles.

Although the council describes Exeter as a “green and attractive city”, poor air quality may contribute to the deaths of 42 people in city this year alone, according to the council – a number the authority compares to “almost four football teams”.

The council also notes that “significant” planned growth for the city is estimated to increase the population of greater Exeter by around 50% by 2026, placing “additional stress” on emissions in the area.

Exeter city councillor Keith Owen, lead councillor for environment, health and wellbeing, said: “Air pollution can be a hidden killer and Exeter is no different to most cities throughout the UK. However we mustn’t be complacent and that’s why we’re trying to address the problem before it gets any worse.

“The main source of local air pollution in Exeter is from traffic. The Low Emission Strategy will set out positive steps to address the issue. We feel it is essential to examine all suitable courses of action now to reduce risks to health and ensure continued sustainable growth for the city. This will keep Exeter clean and beautiful for everyone – both now and for the future.”

In order to inform the draft strategy, Exeter residents are also being asked to complete an air quality survey on the council website. A council steering group will then be set up to oversee the implementation of the strategy.

“We all have a part to play in tackling this serious problem and by doing small things we can improve our own health at the same time. So if we walk or cycle more instead of using the car, not only will we contribute to an overall reduction in air pollution levels but we’ll increase our exercise levels and so improve our own health.”