Only five of the UK’s 43 air quality zones were compliant with EU annual mean limits for nitrogen dioxide in 2013, according to the UK government’s submission on air quality to the European Commission.

The five zones which met the annual mean limit for NO2 of 40 micrograms per cubic metre (ug/m3) in 2013 were: Blackpool Urban Area; Preston Urban Area; Highland; Scottish Borders; Northern Ireland. 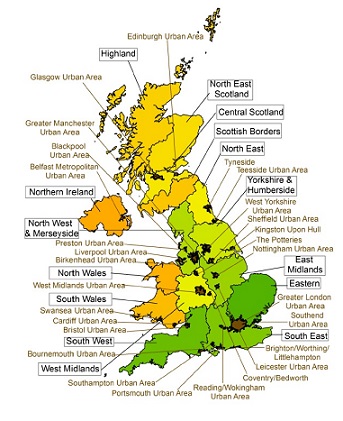 And, 12 the 38 zones failing to comply have been given time extensions from the original 2010 deadline to meet the limit value.

Only five zones also met the annual limits value for NO2 in 2012, while a further four were within the applicable ‘margin of tolerance’.

Meanwhile, the Greater London Area was the only UK zone which failed to meet the one-hour limit value for nitrogen dioxide (200ugm3) on more than the permitted 18 occasions in 2013.

In addition, the UK also exceeded the long-term objective for ozone in 33 zones exceeded, and failed to meet EU limits in six zones for benzo[a]pyrene in 2013.

The findings come in Defra’s ‘Air pollution in the UK 2013 – Compliance Assessment Summary’ report, which was prepared by consultancy Ricardo-AEA and published online on Friday (September 26).

However, on a more positive note for Defra – which is facing legal action from the European Commission over failing to meet nitrogen dioxide limits– the report shows that all UK zones met the limits for sulphur dioxide and PM10 particulate matter.

All zones also met the target value for annual mean concentration of PM2.5 particulate matter, and the Stage 1 limit value, which comes into force in 2015.

Commenting on the report, a Defra spokesperson said: “We recognise that clean air is vital for people’s health and have seen air quality improve significantly in recent decades. Work is underway to ensure compliance with EU NO2 limits – we’ve invested £2 billion since 2011 to increase the uptake of ultra-low emission vehicles, sustainable travel and green transport initiatives.

“Local Authorities are responsible for improving the air quality in their areas and it is for them to identify the best solution for their area. The government supports these efforts through our Air Quality Grant Scheme and Clean Vehicle Technology Fund.”

The European Commission’s decision to pursue legal action followed the UK Supreme Court’s ruling in May 2013 that the UK was in breach of air pollution limits in 16 of 43 zones in 2010 and the UK government is failing in its duty to tackle the problem (see airqaualitynews.com story).

New, tighter limits for a number of air pollutants are also being proposed by the Commission up to 2030 as part of a package of air quality measures unveiled in December 2013 (see airqualitynews.com story).

Hopefully we will get our results in December in South Oxford (City) on NO2 results, after waiting 18 months after re-instatement of a very small monitor in April 2013, for the area off Abingdon Road and Weirs Lane, Oxford. OX1 4UT. Traffic increased since losing our local pub – The Fox and Hounds to a Tesco store, where cars continually enter and leave every 20 minutes max. and all at the bottom of our garden. The County Council is responsible for the roads in this area…..hopefully I will have breath left to hold….