A biogas filling station heralded as the first in the West Country was opened on Friday (September 30) by Somerset MP Ian Liddell-Grainger.

The ‘open-access’ filling station is located at Junction 24 on the M5 at Bridgwater and is part of a national network of bio-gas stations being developed by Gasrec, a company which specialises in producing a low-emission vehicle fuel known as Bio-LNG. 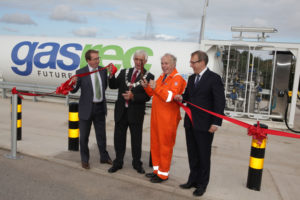 According to Gasrec, the Bridgwater facility, along with others like it, allow HGV fleet operators to cut fuel and pollution costs by converting to dual-fuel or dedicated gas vehicles, and assists the government to improve air quality and meet long term carbon reduction targets.

Gasrec claims that using Bio-LNG typically leads to a 20% reduction in carbon emissions for a standard dual fuel truck. Additionally, when used in a dedicated gas HGV, liquefied gas fuel delivers emission reductions of nitrogen oxide (NOx) of up to 85.8% and particulate matter (PM) reductions of up to 97.1% when compared to diesel.

Mr Liddell-Grainger said: “We’re all for clean efficient energy here in the West Country and Bridgwater likes to be first. This new facility has the potential to save operators money and protect the planet too. Bio-gas may seem a curiosity today but it could soon become a significant contributor to healthier and cheaper freight transport.”

The Bridgwater facility is modular has the capacity to supply up to 80 vehicles per day and will be expanded as demand increases.

In addition, the company has secured European funding for a pilot network of five ”open-access” filling stations across the UK motorway network.

Gasrec claims that as this national infrastructure grows it provides businesses with the confidence to significantly increase their use of low emission bio-LNG for deliveries across the country.

Rob Wood, Gasrec’s chief executive officer, said: “We are very pleased with the support we have already received from many of our existing customers operating in the South West. As news of the facility grows, I am confident many other businesses will see the benefit its locations brings in extending the reach of gas powered HGVs in the region and through to Devon and Cornwall.

“Transport fleet operators recognise the need to make substantial cuts in their emissions. While HGVs only represent around 1% of UK road vehicles, they produce a disproportionate 20% of carbon emissions from UK road transport and a significantly higher proportion of the more dangerous particulate matter and other noxious elements.”