City of York council has unveiled a package of proposed measures aimed at improving air quality, including a Clean Air Zone (CAZ) plan to regulate bus emissions in the city centre.

Under proposals for the Zone, local bus emissions would be regulated based on the frequency that they enter York’s inner ring road. 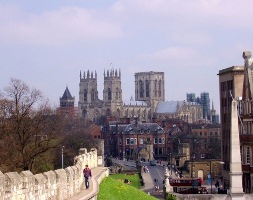 However, the council said that the CAZ is subject to further consultation with bus operators as well as “continuing support in terms of access grants and loan schemes to enable operators to upgrade their vehicles” before it can be implemented.

The CAZ plan is one of a number of measures for the next six years (2014-2020) outlined in the council’s third Air Quality Action Plan (AQAP).

Air quality is monitored by the council at more than 340 locations in the city, while there are currently three Air Quality Management Areas (AQMAs) in the city – York city centre, Fulford and Salisbury Terrace.

Other proposals in the AQAP include: measures to deter vehicle idling; a freight improvement plan; and further measures to reduce emissions from taxis and the council’s vehicle fleet.

In addition, the council is proposing to development a wider electric vehicle recharging network and a compressed natural gas (CNG / biomethane) refuelling station in the AQAP.
Also included in the plan are measures in York’s Low Emission Strategy (LES), which the council claims “was the first strategy of its kind to be adopted in the UK in 2012”.

Elsewhere in the plan there are details of the council’s work to roll out electric buses and put in place a network of public electric vehicle charging points.

After a successful bid to the government’s Green Bus Fund in May 2013, York said it had become the first city in the north of England to introduce a new fleet of electric buses to its park and ride service and other routes across the city (see airqualtynews.com story).

Through the bid, the council and bus companies First and Transdev received £1.4 million funding towards fifteen new electric buses, which were designed to save more than 7,500 tons of carbon emissions over their lifespan.

York also claims to be the first city in the region to introduce a network of pay-as-you-go electric vehicle charging points, with 12 such charging points installed at five locations across the city in 2013 (see airqualitynews.com story).

According to the council, four further charging points have also recently been installed in three additional locations – all with ‘Rapid Chargers’.

City of York councillor Dave Merrett, cabinet member for environmental services, planning and sustainability, said: “Poor air quality is one of greatest challenges currently faced by York, and indeed the UK, and a significant human made cause of ill health and possible premature death.

“Like other local authorities York has an obligation to meet the health-based air quality objectives, and this plan demonstrates how we can better tackle the issue, which is primarily due to vehicle emissions and particularly diesel engines. The promotion of electric engine vehicles, which are very cheap to run, albeit expensive to purchase, will also help us to meet Climate Change Act (2008) targets for reducing greenhouse gas emissions.”

Councillor David Levene, cabinet member for transport, said: “We’ve been determined to improve York’s air quality and the city’s carbon footprint, and have been working with bus operators through York’s Quality Bus Partnership to achieve this.

“A feasibility study commissioned by the council and undertaken by Arup has shown around 80% of York’s bus services could be operated using electric vehicles because they operate largely within the urban area, making it easy to provide recharging facilities. It is City of York council’s aspiration, therefore, to improve air quality in York by converting these services to electric power.”