Brighton & Hove city council has teamed up with a local taxi firm on a scheme to cut air pollution from the city’s cabs.

The council has won £195,000 from the government to convert 30 minibus taxis operated by City Cabs into low-emission vehicles. 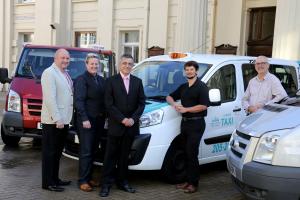 It intends to use the money to fit special equipment to exhaust systems to cut harmful oxides of nitrogen – or ‘NOx’ gases – by over 80%.  The aim is to fit the first taxis in November 2014, with others to follow over the next six months.

The Green Party-controlled council says the scheme should help improve air quality, which remains poor in parts of the city.

Announcing the move last week (October 8), Green Party councillor Stephanie Powell, who is chair of the licensing committee, said: “This is another good reason to choose public transport. People will be able to hire one of these vehicles knowing they’re some of the cleanest cabs around!”

The Department for Transport (DfT) awarded the money to the council on September 8 from its £5 million Clean Vehicle Technology Fund. The council was one of 17 local authorities to win money from the fund (see airqualitynews.com story).

It follows a £750,000 grant in 2013 from the Clean Bus Technology Fund which was used to help Brighton & Hove Buses retrofit 50 of its buses to reduce emissions.

According to the council, the most constant contributor to poorer air quality in Brighton & Hove is emissions from diesel engines in confined spaces.

In February 2014, the council announced that taxi companies operating in the city’s new low emission zone were being encouraged to introduce lighter and more environmentally friendly vehicles to their fleets.

Changes were also proposed to the current licensing conditions for taxi companies following the council’s decision to introduce a low emission zone in the central Brighton & Hove bus corridor to improve air quality.

The zone, due to come into force in January 2015, covers Castle Square, North Street and Western Road as far as Palmeira Square.