A King’s College London air quality scientist has described a recent dispute with the London Mayor’s office over comments made in the press about Oxford Street pollution levels as a “regrettable episode”.

However, speaking during a meeting of the London Assembly’s environment committee yesterday (November 6), which focused on tackling emissions from diesel vehicles, KCL’s Dr Frank Kelly said he stood by the comments, which he suggested had been “misinterpreted” in the press. 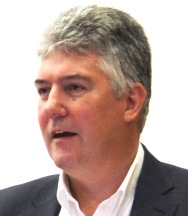 Dr Kelly’s colleague at KCL, air quality scientist Dr David Carslaw, was reported by the Sunday Times in July as stating that Oxford Street NO2 levels were the “highest in the world” (see airqualitynews.com story).

This claim has been strenuously denied by the Mayor’s Office, with the Mayor’s advisor Matthew Pencharz writing last month that he trusted in future “more rigour will be applied to public statements” made by KCL staff (see airqualitynews.com story).

However, asked yesterday by Assembly Member Murad Qureshi to comment on the dispute, Dr Kelly said: “It’s a regrettable episode. But there was an interim step, and that was David Carslaw’s comment that Oxford Street has the highest NO2 concentration that we were aware of anywhere in the world, was translated to ‘the worst air pollution in any city in the world’, and that’s what I think the Mayor objected to.”

He added: “So the statement that was made by my colleague still stands but I think it was misinterpreted – misreported by the press. There was discussions about whether the statements in the press were a correct interpretation of our statements, and that area was clarified.

“And, as I say, we stand by the observations that Oxford Street currently has a very high NO2 concentration and the main point is we need to do something about it.”

Dr Kelly also explained at the meeting that risks associated with NO2 were “of the same magnitude” to those regarding particulate matter PM2.5, but that there was “no easy solution” to air quality problems in London.

He told the committee: “We need to look at all options for stopping the risks of the gases and reducing the exposure of people to these gases. We need to go beyond looking at just one particular source in our cities.”

Another environment committee meeting on diesel emissions, with a focus on taxis, will take place in December or January, ahead of the planned publication of a committee report on the subject in early 2015.