UK budget airline easyJet is set to trial a new hybrid fuel cell system designed to reduce both carbon and air pollution emissions from its planes. 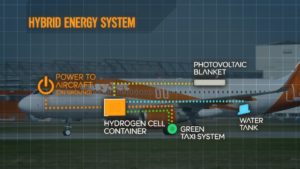 Working in partnership with its industry partners and suppliers, easyJet hopes to begin trials later this year for the ‘cutting edge’ technology, which uses a fuel cell to capture energy from the aircraft’s breaks when landing.

This energy is then used to ‘taxi’ planes between boarding area of an airport and the runway before and after take-off, instead of using the plane’s jet engine, as is usually the case.

The company said that due to the high frequency and short sector lengths of its operations, around 4% of the airline’s total fuel annual fuel consumption is used when its aircraft are taxiing.

EasyJet therefore claims using this hybrid system instead of the jet engine can reduce carbon emissions and save around 50,000 tonnes of fuel per year, while a spokesman for the airline also said he expected the technology to cut air pollution emissions from the planes.

And, according to easyJet, the only waste product from hybrid system is clean water, which can then be used to refill the aircraft’s water system throughout the flight.

EasyJet said that the development of the hybrid aircraft is part of its wider strategy to reduce its passengers’ carbon footprint.

Over the last 15 years, the airline has reduced its carbon emissions by 15%, with a target of a further 7% decrease over the next five years compared to its current level of emissions.

This, combined with the fact that the airline fills most of its seats, means that an easyJet passenger’s carbon footprint is estimated to be 22% less than a passenger on a traditional airline, the company claims.

The inspiration for the hybrid plane concept came from students at Cranfield University, who were asked by the airline to develop ideas for what air travel might look like in 20 years’ time as part of a competition called ‘The Future of Flight’. 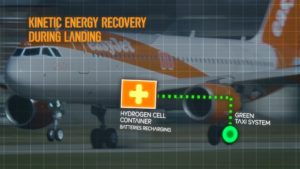 Engineering director at EasyJet Ian Davies and his team then took the chosen concept and combined it with easyJet’s own model to develop the new aircraft system.

Mr Davies commented: “The hybrid plane concept is both a vision of the future and a challenge to our partners and suppliers to continue to push the boundaries towards reducing our carbon emissions. It’s also a great example of the benefits of our strategic relationship with Cranfield University.”

Dr. Craig Lawson, lecturer at the University’s Centre for Aeronautics, added: “We are delighted to be working on this project with easyJet on what is a real-world example of how we can innovate together.

“Our students have showcased some exciting ideas for the 2035 vision of the airline industry through The Future of Flight competition, presenting environmental solutions, operational improvements and ideas to enhance the customer experience. We’re looking forward to developing this concept further.”