Government must produce a strategy to ‘clean up’ road transport, and ensure that efforts to tackle air pollution and climate change are not developed in isolation, a leading think-tank has urged today (26 June).

In a report, ‘Driving Down Emissions’, the Policy Exchange think tank claims that despite efforts by successive governments greenhouse gas emissions from road transport have increased by 1% since 1990, and 75 areas across the UK still exceed the legal limits for NO2 concentrations. Policy Exchange adds that there is a potential ‘tension’ between efforts to meet decarbonisation objectives without harming air quality – evidenced, it says, through the promotion of diesel vehicles as a means of helping to meet the UK’s climate change ambitions.

In producing the report, the think tank assessed the different transport options available, and how these could be used to meet the twin climate change and air quality aims.

This includes encouraging improvements in the efficiency of conventional vehicles, further adoption of ultra-low emission vehicles, use of alternative fuels such as biofuels and natural gas, replacing road transport with other modes of transport such as rail, or encouraging behaviour change through activities such as car sharing.

The report calls for a new strategy to ‘clean up’ road transport, in order to deliver reductions in the emission of greenhouse gases, whilst also addressing the UK’s non-compliance with air pollution targets.

It states: “Whilst government clearly recognises these challenges, the current approach to tackling them is disjointed and insufficient. As it stands, there are a number of strategies and policies in place, but no overarching government strategy to deliver the required reductions in greenhouse gas emissions, and a weak strategy to address NO2 pollution.” 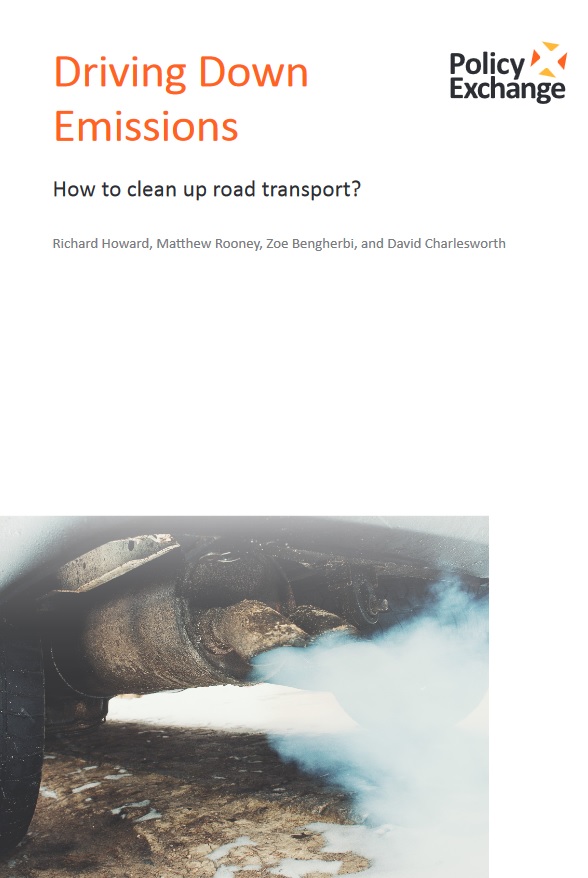 This would include making further improvements in conventional vehicles, scrapping or retrofitting older diesel vehicles, switching to alternative fuels such as LPG or CNG for heavy duty vehicles, and restricting the most polluting vehicles from entering cities.

In the medium and long term, further progress in increasing the uptake of ultra-low emission cars and light vans is recommended.

Elsewhere, Policy exchange adds that currently there are several different government departments which have an influence on policies in the transport, climate change and air pollution arenas, and that ‘greater coordination’ is needed to ensure that all parts of government are working towards a ‘common vision’ on the future of road transport.

Among its many recommendations Policy Exchange states that the Department for Transport should develop a new vehicle rating system – which would take into account the ‘direct’ exhaust emissions, as well as ‘indirect’ emissions associated with power generation.

The think tank also calls for a ‘continual’ review of the grants system for ultra-low emission vehicles – in order to ensure that it is still obtaining value for money.

Policy Exchange claims that battery-electric and plug-in hybrid electric vehicles, are likely to be cost-competitive with conventional vehicles, without grants, by the early 2020s, which may mean that subsidy support will not be required in future.

The report also recommends that government put in place an “appropriate regulatory framework” to create a competitive market for electric vehicle charging infrastructure, which should be brought within the remit of Ofgem.

Government funding for the deployment of hydrogen vehicles and infrastructure should continue to focus on heavy goods vehicles and buses, the report claims, as this appears to be the vehicle segment where hydrogen has a potential advantage over battery electric vehicles.