Air quality improvements in Oxford have slowed, the city council has reported in its Air Quality Annual Status Report 2017.

According to the council, in the last the last decade, levels of nitrogen dioxide (NO2) at the roadside across Oxford have dropped by an average of 36.9%. 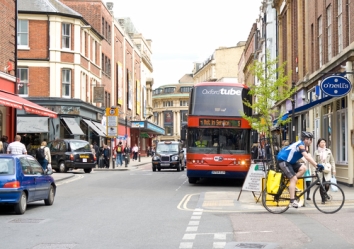 This includes a reduction in NO2 levels across the city centre by 18.9% between 2011 and 2013. However, figures presented in the council’s latest progress report suggest that between 2014 and 2016, average NO2 levels fell by just 3.9%.

Councillor John Tanner, executive board member for a clean and green Oxford, said: “We have seen air pollution levels drop by 36.9% in the last decade. This significant reduction has been due to a wide range of work carried out by the city and county councils, particularly the Low Emission Zone.

“But now we are beginning to see air pollution levels fall much more slowly in Oxford. Another step change in tacking pollution is urgently needed. Oxford City is supporting the idea of a Zero Emission Zone in the city centre to clean up Oxford’s air. Last week we wrote to the Government to request more funding and powers to tackle pollution.”

The European Union requires national governments to keep annual average NO2 levels across their countries to below 40µg/m3.

Oxford’s progress report found that the 40µg/m3 target was exceeded at 17 of the 70 diffusion tube locations – a reduction from 21 locations in 2015 and that there were no new locations reporting exceedences.

Levels of NO2 rose slightly around the Westgate Shopping Centre redevelopment, likely due to road closures. The highest measurement in the area was 35µg/m3 in Norfolk Street – below the 40µg/m3 target.