Subscribe To Our Newsletter
Council, Freight & Transport, Fuels
Will Date

Speaking to airqualitynews.com, Vince Dignam, business improvement and performance manager at the City of London discusses putting the first fully-electric refuse collection vehicle through its paces in the city.

Home to some of the capital’s major businesses in the financial and legal sectors, London’s Square Mile is an important cog in the city’s financial machine with more than 300,000 people commuting in to the area to work every day. As one of the city’s oldest districts, the area also houses famous landmarks including St Paul’s Cathedral, the Museum of London and Leadenhall Market, drawing in an estimated 8.9 million visitors every year. 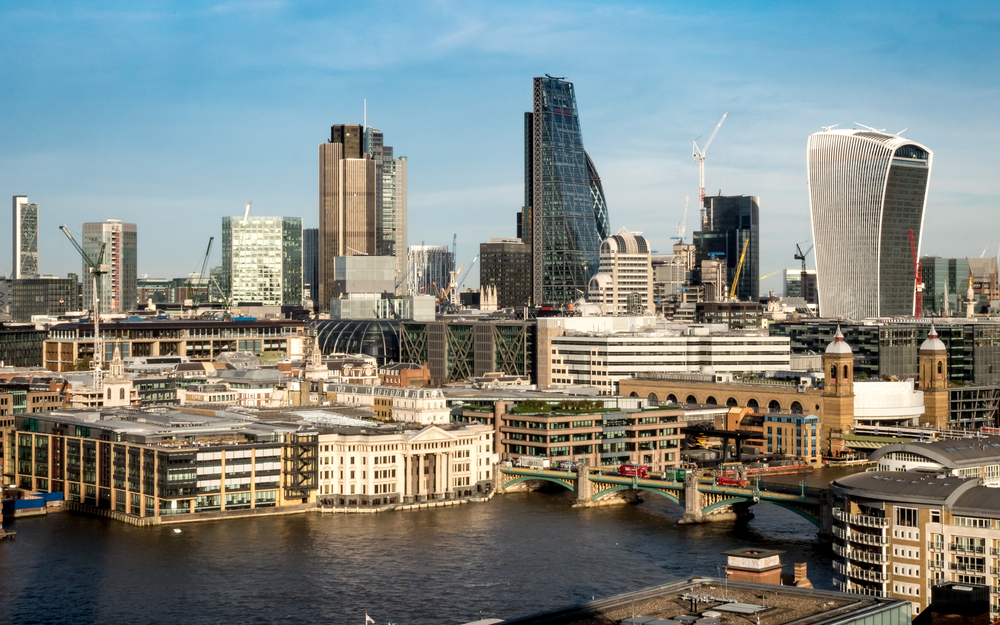 Thrown into the mix are the 9,400 permanent residents who live in the city – presenting unique challenges to the City of London Corporation – the local authority managing services across the district, including waste and recycling collections and street cleansing.

Making this doubly challenging is the ongoing battle to clean up London’s air. Action to address air pollution in the capital – which is linked to around 9,500 premature deaths every year – is gathering pace.

Central to the Mayor of London’s air quality strategy is the adoption of the Ultra-Low Emission Zone, which will toughen the standards for the operation of heavy and light vehicles in the capital from October 2020.

For London’s local authorities this adds an extra level of complexity when considering future fleet options – with all HGVs needing to comply with at least the Euro VI emissions standard to avoid additional costs.

But, for Vince Dignam, the City of London’s business improvement and performance manager, the ULEZ presents an opportunity to look at how new technologies can clean up the city’s air.

“I’ve made it my personal business to get involved in the air quality group here in the City,” he explains. “I call it the golden thread through the City, we all get involved, we don’t just work in our silo areas. For me, I have a family, and there’s so much information about why diesel needs to be limited to only where it is necessary.

“My vision is that we have a safe environment to live and work in, and to visit. We don’t want people not visiting the city because there is terrible air quality. There’s a bigger picture.”

Mr Dignam oversees the City of London’s contract for the collection of waste from the City’s residents and businesses. City of London, collects waste and recyclables from the Square Mile using a fleet of four refuse vehicles for residential properties and seven for commercial collections – with all vehicles currently running on diesel power and using a battery-operated body. 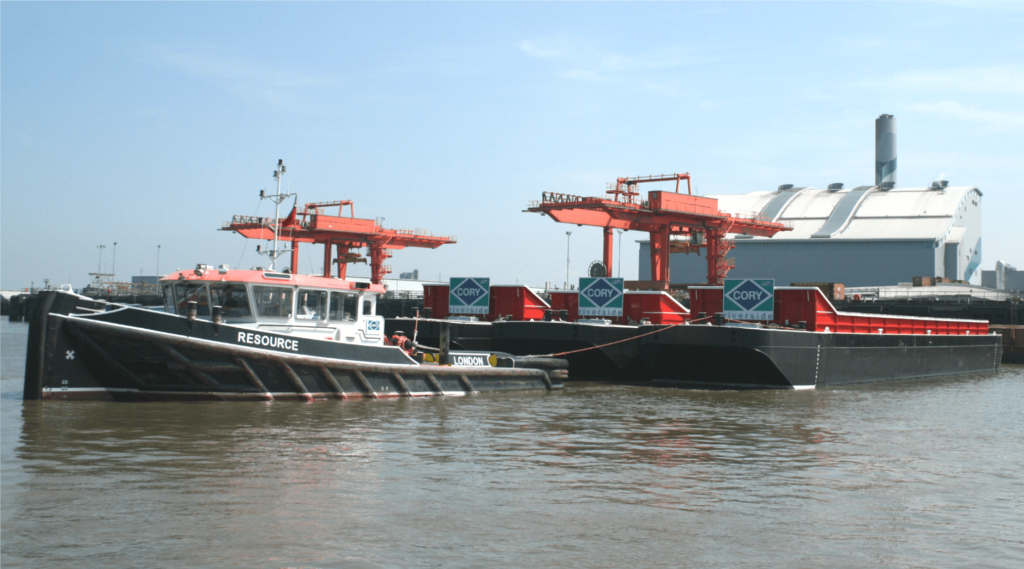 Crews are dispatched from the Corporation’s Walbrook Wharf operational centre along the banks of the Thames, travelling between 20 and 30 miles per day on collection rounds, before returning to the depot where waste is bulked for onward transfer by barge to Cory’s energy from waste plant at Belvedere.

From this month, City of London is taking part in a pioneering trial that will see the UK’s first-ever fully-electric refuse collection vehicle operating full shifts alongside the diesel-hybrid trucks currently employed on the City’s contract.

Provided by vehicle manufacturer Electra through supplier NRG Fleet Services, the 26-tonne refuse vehicle features a Geesinknorba chassis, and uses a lithium ion battery with a capacity for up to 120 miles of travel on one overnight charge as well as powering the body. Unlike diesel, the vehicles offer zero tailpipe emissions, which make it particularly appealing given the City’s desire to eliminate transport pollution where possible.

“The challenge has been in that truck sector, knowing which way to go, we want electric because the City feels it is one of the good alternative technologies out there and the infrastructure is amazing,” Mr Dignam added, noting that City of London had been considering options to move beyond for a number of years. “All you need is your power supply and your energy and away you go.”

As with the car sector, concerns have existed over the potential range and power afforded by electric trucks, as well as the availability of infrastructure to ensure that the vehicles have enough charge to carry out their job. But, advances in battery technology in recent years have brought the technology closer to market. 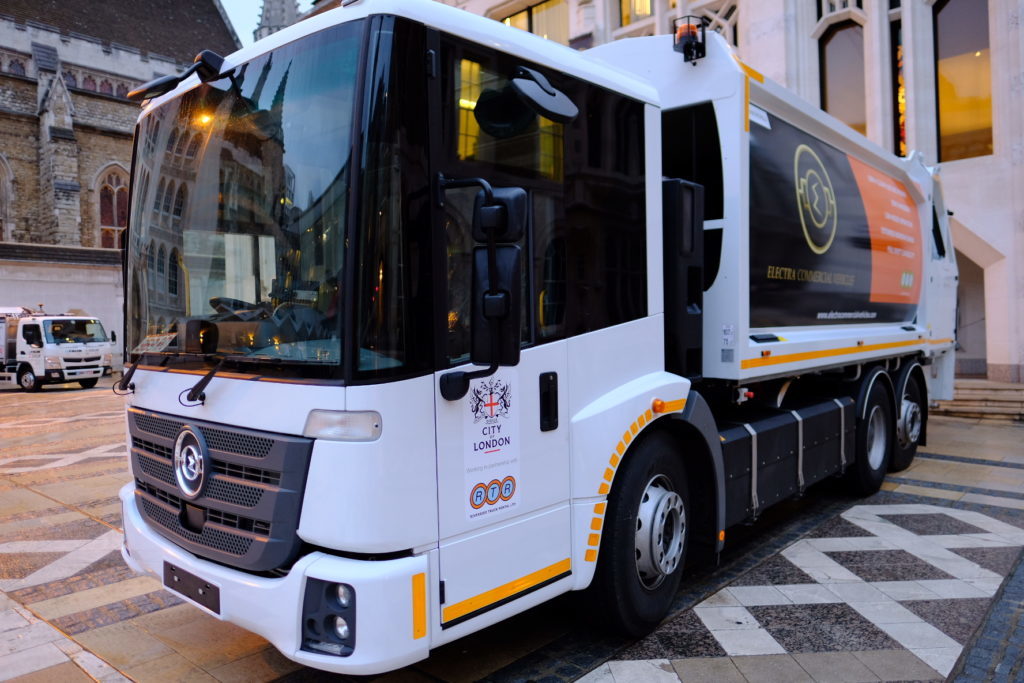 Mr Dignam said: “We already have a lot of the infrastructure in place. These need three-phase charging points, we have got them, we have only had to change one plug to make this happen for the trial. The good thing is the vehicles operate out of here, they operate in the Square Mile. We have our own transfer station on the Riverside. The waste comes in it goes onto the river and to the energy from waste plant at Belvedere.”

City of London plans to assess whether the operational benefits of switching from diesel to electric, as well as the potential air quality improvements, create an attractive case for rolling out further electric vehicles across its fleet, when vehicles are up for renewal in 2019.

However, whilst the allure of zero emissions is attractive, Mr Dignam notes that this can-not mean a compromise in operational output. “What I am going to be looking forward to seeing is the full seven-hour shift,” he explains.

“This sector is ripe for the new technology. Number one we need to make sure it can do that cycle, number two, that the driver how it drives and compacts – can it take that full load as easy as it says it does. We know the back end can, because it does it already. If the battery and the chassis and the driveline works properly it fits like hand in glove,” he said.