A smartphone game designed to raise awareness about issues relating to air pollution has launched in Bristol.

The game, which has been set up as part of the ClairCity project – an EU funded initiative to raise awareness about air pollution and carbon emissions in cities – has been backed by the Mayor of Bristol Marvin Rees. 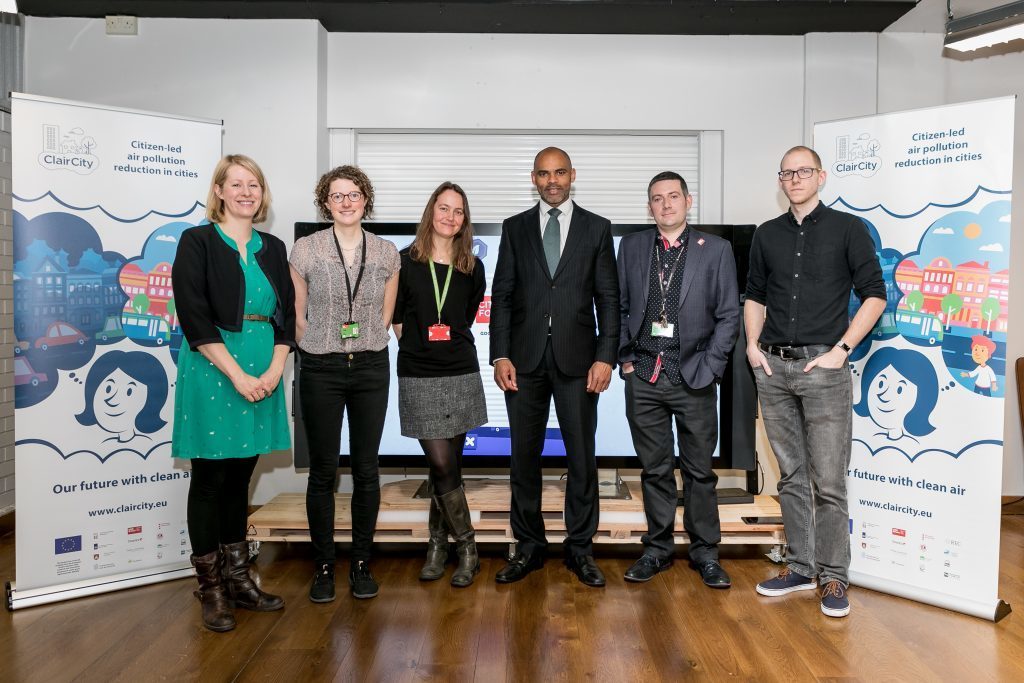 Marvin Rees, Mayor of Bristol (centre) with the ClairCity team

Bristol city council is a partner in the ClairCity project, working alongside the University of the West of England (UWE Bristol).

Five other cities across Europe are also partners in ClairCity: Amsterdam in the Netherlands; Sosnowiec in Poland; Ljubljana in Slovenia; Liguria region in Italy; and the Aveiro region in Portugal.

Using the game, smartphone app, competitions, workshops and events ClairCity aims to engage residents on how they see cities developing in the future.

This project has received funding from the European Union’s Horizon 2020 research and innovation programme.

The ClairCity Skylines game, available on iOS and for Android, gives players the chance to design how Bristol will look for the next 50 years. Players will learn how the consequences of their choices impact air pollution and CO2 emissions in the city.

According to ClairCity, the data gathered from players of the game will help to “identify the impacts, preferred choices and potential pitfalls that Bristol faces” in tackling air pollution and responding to future development needs.

He said: “The ClairCity project’s new game is an exciting and different way of getting people involved in the conversation about air quality. This is a massive issue facing Bristol with our residents and visitors at risk from unacceptable levels of pollution.

“We are working hard to tackle the issue but we need everyone to work together and be aware of what we can all do to contribute to making a positive change. As well as being entertaining, this game will also provide us with an alternative insight into what people might like to see happening in our city to make it a healthier place.”