On Monday April 8 2019, a new Ultra Low Emission Zone (ULEZ) will be introduced in central London. The Mayor’s stated aim for the ULEZ is to ‘improve the health of Londoners by cleaning up the city’s toxic air’. The ULEZ is set to operate 24 hours a day, 7 days a week, all year round. Owners of vans, lorries coaches, buses, cars and motorbikes that don’t meet defined emission criteria will have to pay a daily charge to enter the zone.

ULEZ emission criteria are based on European emission standards, known as the Euro standards. It is well documented that the emissions performance of vehicles on the road can be very different from their certified Euro standard emissions levels. These discrepancies threaten to undermine well-intentioned pollution reduction policies, resulting in interventions that fail to deliver the benefits originally anticipated.

A low emission zone (LEZ) is the term given to a geographic area where vehicular access is restricted, or deterred, for certain classes of vehicles – the aim being to improve air quality. The impact that any LEZ policy has on emissions will depend on its ambition. Regardless of the LEZ, what the policy ultimately delivers will depend on the actual real-world emissions performance of vehicles that drive within the zone.

For the ULEZ, and indeed for most LEZs and Clean Air Zones (CAZs) around the world, no recognition is given to the difference between the certified emissions performance of vehicles and their real-world behaviour – yet these differences can often be significant…does this matter?

Vehicle emissions in the real world

Over the last few years Ricardo has been unpicking this question. Our unique database of real-world vehicle emissions is underpinned by measurements made using remote sensing technology that accurately records the real-world driving emissions from vehicles, at the roadside, under actual driving conditions.

One of the advantages of remote sensing measurements is that they directly provide fleet-weighted average real-world emissions. An important strength of this approach is that it provides insight into the whole vehicle fleet. In principle, this allows for the quantification of emissions from vehicles directly affected by an LEZ as well as those that are not. Both pieces of this jigsaw are needed for a robust understanding of what any LEZ policy will bring regarding vehicle emissions reductions.

Does the lack of regard for the difference between certified vehicle emissions performance and their real-world behaviour matter?

Ricardo’s real-world vehicle emissions database provides estimates of the g km-1 of nitrogen oxides (NOx) by vehicle type, Euro standard and vehicle model. Figure 1 (which look like a colourful emissions version of Joy Division’s ‘Unknown Pleasures’ album cover – Google it if you have not seen this before!) shows the distribution of NOx emissions from diesel passenger cars, where over 400 individual models of vehicle have been considered. 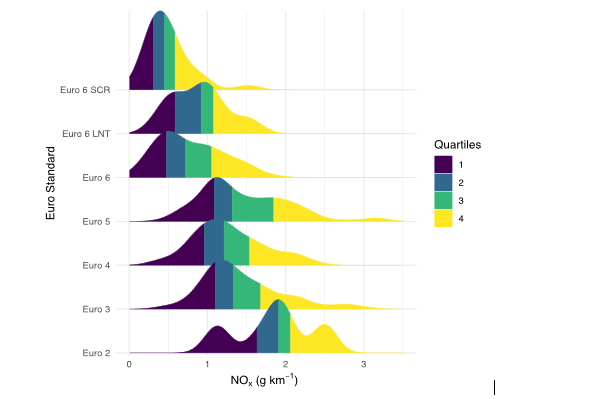 The results in Figure 1 broadly indicate that emissions of NOx did not change by much from Euro 2 to Euro 5, shown by the similarity of the distributions. The data also highlights a distinct shift to the left in the Euro 6 distribution, which hit the fleet from 2014, indicating lower emissions overall than earlier Euro standards.

This is really the first time there has been a dramatic change in NOx from diesel cars. A closer look at the Euro 6 distribution shows that about three-quarters of these vehicles have emissions that are cleaner than the lowest 25% of the previous Euro 5 standard vehicles. As such, a shift to Euro 6, driven by the implementation of the ULEZ, or any other LEZ/CAZ policy, clearly has the potential to considerably reduce NOx emissions.

What is also very apparent from Figure 1 is that all distributions overlap to some degree (i.e. some pre-Euro 6 vehicles are lower-emitting than some Euro 6 vehicles). From an LEZ perspective, this means that some older, but low emission vehicles, will be barred from entering an LEZ (unless owners pay the charge).

This reality has consequences for the optimum design of emissions reduction policies, arguably raising the question as to whether LEZ schemes based on Euro standards are too blunt an approach to effectively tackle air pollution.

Figure 1 also provides a closer look at the emerging story of the Euro 6 standard. As highlighted above, Euro 6 brings lower emissions overall than earlier Euro standards – about 50% lower on average than Euro 5. Automotive manufacturers deliver Euro 6 through two main NOx after treatment technologies:

The data shows that emissions from SCR-equipped vehicles are about half that of LNT vehicles.

The data shown in Figure 1 does not fully reveal the complexity of Euro 6 and the many stages involved (Euro 6b, c, d-temp and d). Therefore, within Euro 6, there is a wide range of emissions performance. Vehicles that have been entering the fleet in the past year or so have considerably lower emissions than early generation Euro 6 vehicles that entered the fleet from 2014. The difference is striking, at least a factor of two overall – and higher for many individual models. 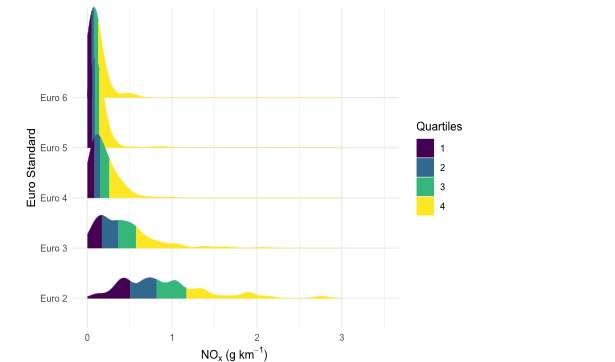 As mentioned earlier, the insight that this approach can bring to the whole vehicle fleet is a key strength. For instance, when considering light commercial vans, there is a similar situation to that shown for diesel cars in Figure 1 – albeit a slightly larger, and welcome, average emissions reduction between Euro 5 and Euro 6.

The situation for heavy goods vehicles (HGVs), shown in Figure 3, is different again. In the case of HGVs, the real-world reduction in NOx realised from moving from Euro V to VI is strikingly considerable – shifting the HGV fleet to Euro VI is a clear win.

This data helps to demonstrate the importance of understanding real-world behaviour and why fleet-weighted average real-world emissions offer a sound basis upon which to develop truly evidence-based, low-emission policy. This also highlights the real-world benefits that are likely to be seen from implementing LEZs and CAZs. 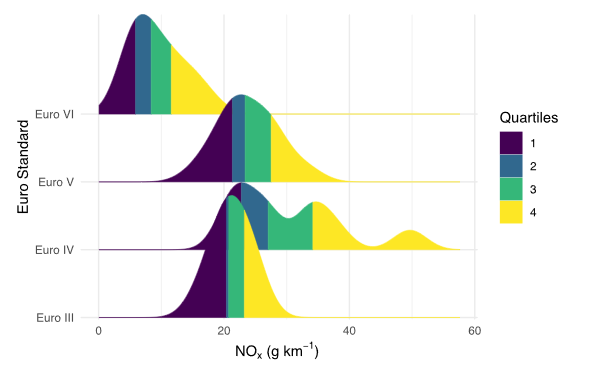 The initial stage of the London ULEZ will cover the same area as that of the existing Congestion Charge. Here, understanding the whole fleet is important. This zone has a very different fleet composition compared with that for the rest of London, including a higher proportion of Transport for London (TfL) buses and taxis than the wider London or UK fleet. These vehicles are important contributors to NOx emissions, and nitrogen dioxide (NO2) in particular, in the zone.

Data collected by Ricardo, in partnership with the International Council on Clean Transportation (Dallmann et al. 2018), highlights that good progress is being made in reducing NOx emissions from buses with big gains accrued from the move to Euro VI.

However, the situation for taxis is far more challenging. Taxis, as high NOx emitters, will continue to make an important contribution to central London emissions for some time to come. Ricardo’s real-world emissions measurements suggest that Euro 5 black cabs emit around 2.2 g km-1 (i.e. at the high end of the distributions shown in Figure 1).

There are also other factors at play that are emerging from the latest evidence. For instance, recent analysis of ambient air quality concentration data from across Europe, coupled with insight delivered from our real-world emissions data, is highlighting the important role of primary NO2 emissions in this mix. Primary NO2 emissions have reduced significantly since 2010 (Carslaw et al. 2018; Grange et al. 2017).

However, much of the work that has been done in developing LEZs has not accounted for these changes. This evidence has the potential to be an important insight as it is possible, maybe likely, that emissions and concentrations of NO2 will decrease more rapidly than is predicted.

Understanding real-world emissions and other related factors is critical to the development of well-informed air quality interventions such as LEZs. In this respect, carefully analysing ambient air-quality concentration is of great importance to ensure that changes in emissions have the anticipated effects on the actual concentrations of the pollutants that we breathe.

After all, it is the concentration of pollutants, not the emissions themselves (although clearly linked), that must be addressed if the health of those exposed is to improve. What matters, and what we really need, is a low concentration zone (or a ‘low exposure zone’ – also known as an LEZ).

Our current work is supporting a London Borough to understand the impact of the introduction of the ULEZ, assessing the impact of the Bus Emissions Abatement Retrofit Programme in Scotland and supporting local authorities in developing and understanding CAZs. For more information on Ricardo’s remote sensing real-world emissions measurements work, please visit: https://ee.ricardo.com/air-quality/case-studies/remote-sensing-blog-2