Data taken early last week found that sites close to the protests experienced significant drops in nitrogen dioxide (NO2) concentration) as road traffic in those areas was reduced.

The Strand, near Waterloo Bridge, and Oxford Street both had lighter air pollution than normal, while hourly pollution levels in the latter were down by almost 50%.

‘None of the monitoring sites are in locations where traffic is completely blocked and reductions in nitrogen dioxide concentrations would be likely to be much larger where no traffic is able to pass at all as has been seen during other road closures,’ London Air summarised.

‘There is little evidence of any significant increase in nitrogen dioxide concentrations in areas neighbouring those where the protests are taking place.’ 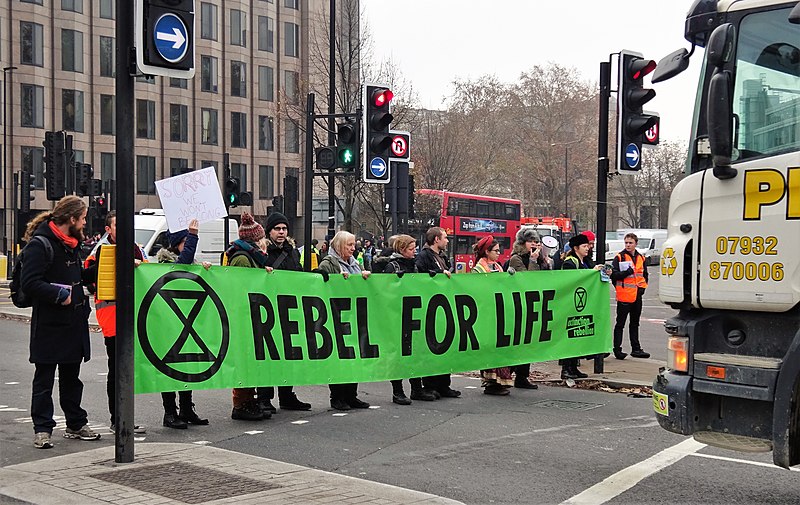 Extinction Rebellion is calling for the government to reduce the UK’s greenhouse gas emissions to zero by 2025.

London Air compared hourly NO2 concentrations in sites between last Monday and Wednesday when the protests were taking place to concentrations on those days of the week in spring in recent years.

The Strand saw a small reduction in NO2 concentrations during the days of the protests, with the site experiencing 91% of its usual pollution levels over the course of the day.

Oxford Street saw an even bigger reduction as NO2 concentrations were 18% lower than normal while hourly pollution levels were cut by as much as 45% by mid-afternoon.

However, areas such as Holborn – north of Waterloo Bridge – experienced very little change in NO2 concentrations, while locations outside central London such as the North Circular and Greenwich saw increases.

London Air admitted that the readings may have been affected by the school Easter holidays taking place at the time, which usually lead to lower traffic levels.

The site explained: ‘The difference in concentrations well away from the affected areas is inconsistent and reflects possible increases in pollution due to meteorological conditions, offset by the possible decreases in concentrations due to lighter traffic in the school Easter holidays.’

Extinction Rebellion is protesting in central London to pressure the government into declaring a ‘climate and ecological emergency’.

The movement is calling for urgent action to halt biodiversity loss and to reduce the UK’s greenhouse gas emissions to zero by the year 2025.