Bristol City Council has made available a fleet of 10 electric cars to allow more people in the city to rent zero-emissions vehicles.

The fleet of 100% electric Renault Zoe cars, made possible by funding from the European Union research project REPLICATE, are based at nine locations across the city including on-street parking in three areas.

The electric vehicles are being overseen by the national car club Co-Wheels, which lets its members hire cars on a pay-as-you-go basis.

Cllr Kye Dudd, cabinet member for transport and energy at Bristol City Council, said: ‘I’m delighted that there are new electric vehicles for hire in the city, as it means more people will be able to experience the benefits of modern zero-emission cars.

‘The electric vehicles will help us to reduce the impact of the city’s current transport system and improve air quality, as no carbon emissions are produced and many car club members choose to give up owning a car.’ 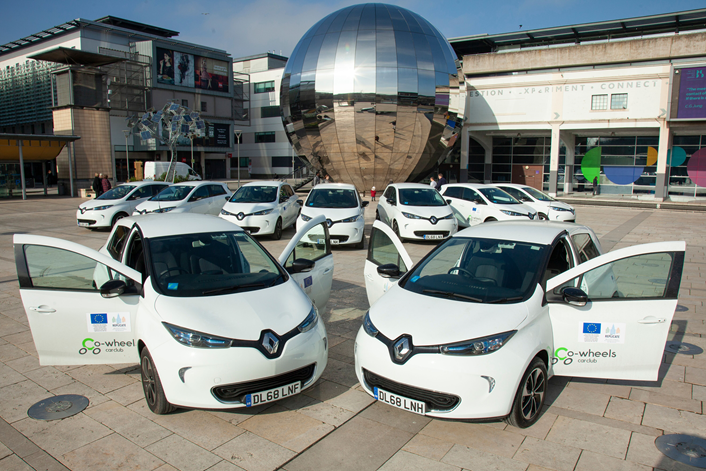 Co-wheels has launched an introductory offer for Bristol residents in order to encourage take-up of the electric vehicles.

New members to the club will only need to pay £1 to get £25 worth of driving credit added to their account, which they can use against the hourly hire charge.

Falconer said: ‘Many Co-wheels members don’t want to add another car to our busy roads and would rather use a shared vehicle when they really need one – and now they have the option to reduce the impact on our environment even more by using a zero-emission vehicle.

‘It also means we can expand our availability into new parts of the city we have not been able to serve before.’

The scheme forms part of the REPLICATE research project, which encourages Bristol residents to try out new ‘green’ energy, mobility and ICT solutions.

The five-year project, funded by the European Commission’s Horizon 2020 programme, is also enabling Bristol to install 14 smart electric charging points across the city for electric vehicle owners to use.