As a manufacturer of air quality sensors, Alphasense has been closely involved with the development of air quality management strategy around the world, and in the following article, one of the company’s air quality experts Dr John Saffell explains the evolving and vitally important role of air quality monitoring.

The world’s urban population has grown rapidly from around 751 million in 1950 to 4.2 billion in 2018. According to the United Nations, in 2018 55% of the world’s population lived in urban areas, and this is expected to increase to 68% by 2050. Projections show that urbanisation, coupled with global population growth could add 2.5 billion people to urban areas by 2050, with around 90% of this increase taking place in Asia and Africa.

The main sources of urban air pollution are combustion products from motor vehicles, heat and power generation, industrial facilities, municipal waste incineration, residential cooking, heating, and lighting, plus gases and volatile organic compounds (VOCs) from landfills, wastewater treatment plants and intensive farming. Although urban air quality has improved in some developed countries, according to the World Health Organisation (WHO), air pollution is getting worse in most low and middle-income cities. Contributing factors include increased power demand and the soaring use of private vehicles.

When considering ambient air quality, it is important to differentiate between the four main issues: greenhouse gases (GHGs), urban air quality, indoor air quality and nuisance odours. These are of course inter-related, but their causes differ and mitigation measures vary accordingly. Climate change is caused by GHGs such as methane (CH4) and carbon dioxide (CO2), but these gases are not the most important from a health perspective. Diesel vehicles emit less CO2 per mile than petrol vehicles, which is why they could be considered more ‘climate-friendly,’ but diesel vehicles are generally responsible for more nitrogen dioxide (NO2) and particulates, which is why many cities are setting up Low Emission Zones that limit diesel vehicle access.

Globally, around 3.8 million premature deaths are attributed to ambient air pollution every year, 80% of which, according to the WHO, are due to heart disease and strokes. A further 20% are from respiratory illnesses and cancers related to exposure to fine particulate matter (PM2.5). Gases also represent a significant risk to human health; these include nitrogen dioxide (NO2), ozone (O3), sulfur dioxide (SO2) and carbon monoxide (CO), as well as volatile organic compounds (VOCs). Most of these pollutants are not visible, so monitoring is essential.

Traditional air quality monitoring stations are large mains powered housings with reference grade analysers that require regular calibration and maintenance.  Data from these stations are essential because they can be used for enforcement and are accepted in a court of law.

However reference air quality monitoring stations are expensive to construct and maintain. In addition, these large structures are often difficult to locate and require planning permission from the local authority. Importantly, they only provide air quality data from one fixed location, which may not be representative of local air quality. Urban air quality maps therefore depend heavily on air quality modelling with only a few accurate data points.

Highlighting the disadvantages of fixed station monitoring, researchers from Cambridge University deployed low cost Alphasense sensors in the backpacks of (cycling and walking) students to ‘map’ air pollution across the city. The results showed that some parts of the city experienced NO2 levels over ten times that measured by the reference station.

Air quality monitoring is substantially improved when continuous monitoring is undertaken using high density networks. Pollution hot-spots can be identified on a temporal and spatial basis, helping to select the best mitigation measures and then locating sensors at, for example, places where new traffic management measures are implemented.

High density local air quality data has long been the dream of city and town planners, but reference stations are prohibitively expensive, and in the past the performance of low cost ambient air quality sensors was unacceptable.

However, Alphasense has invested heavily in research and development in this area, and is now routinely supplying high quality reliable gas and particle sensors to partners who manufacture air quality networks. The key issues addressed by this work included sensitivity, stability, selectivity and repeatability. This work has delivered a number of important and unique innovations. Every sensor manufactured by Alphasense for the last two decades has been tested and the records are retained in-house. Consequently, every air quality sensor is supplied with the detailed performance for that individual sensor. 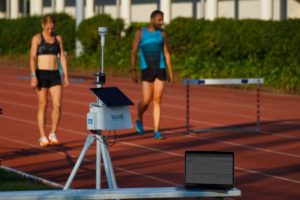 Spatially dense monitors provide greater insight into the air quality status of a city, extending beyond better data granularity. For example, if one monitor in a network shows an elevated reading, the cause is mostly likely a local point source of pollution, but if all closely located monitors show elevated values, then that would indicate a distant (far field) pollution source. Also, since many gases and particle sizes are normally monitored, investigators are able to identify specific pollution types – for example, adding a CO2 sensor and particle size monitor can help identify the type of combustion sources.

It is also possible to track the movement of pollution through a network, particularly when the readings are supplemented by wind measurements. In these circumstances, the visualisation of data is key; for example, some network operators have developed maps which display live colour-coded data displays from which it is possible to capture the display over several hours or days and create brief animations that dramatically help to visualise the movement of an air pollution plume.

Perhaps the greatest benefit of networks is their ability to provide local or ‘hyperlocal’ personal data. This localised data is of significantly greater interest to citizens; helping them to make informed decisions such as where and how to travel, where to exercise, and even where to go to school or buy a house.

The ‘Breathe London’ project is a good example of an installed network. Over 110 AQMesh pods containing Alphasense gas sensors, have been located around London – mostly mounted on lamp posts. The project is being delivered by a consortium led by Environmental Defense Fund Europe in partnership with the Mayor’s Office.

It is providing a unique insight into local air quality that will inform development strategy, whilst also engaging London citizens; helping them to identify pollution hot-spots and think about how they can help solve local air pollution problems. Hyperlocal air quality data is an important feature of smart cities, helping policy makers and planners to assess mitigation measures and develop infrastructure that delivers cleaner air. Data from the London monitoring pods can be viewed at www.breathelondon.org.

A further example of an air quality monitoring network is being developed by the International Association of Athletics Federations (IAAF) in collaboration with the United Nations Environment Program (UNEP). This five-year partnership between the IAAF and UNEP, supported by the Climate and Clean Air Coalition, aims to install 1000 monitors at IAAF certified athletics tracks around the world. The project provides an opportunity for countries with limited air quality data to learn how low-cost sensors can provide evidence to improve the health of citizens and future athletes. The monitors, which also utilise Alphasense sensors, are being supplied and installed by Kunak Technologies of Spain. To see live data from one of the stadia visit https://monaco.diamondleague.com. 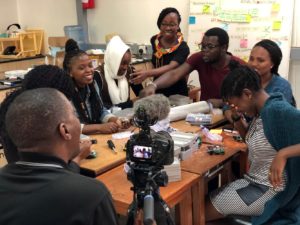 In locations where there is either no air quality monitoring or where simple indicative measurements would be of value, the number of citizen science projects is increasing rapidly.

Typically, these are research collaborations between scientists and volunteers that seek to expand the gathering of scientific data. Such projects deliver the combined benefits of more data (to inform models) and more engaged, better informed citizens.

These projects do not require the accuracy of industrial grade low cost air quality networks, which is important because now these low cost sensors can be used in lower cost housings that require little maintenance and validation, which reduces the initial network cost and effectively eliminates maintenance costs.

These citizen science air quality units are effective at identifying pollution hot-spots and help citizens to better understand the local issues that give rise to their pollution levels.  Alphasense supplies the same low cost sensors to both citizen science projects and manufacturers of performance accredited air quality monitors.

Supported by the Centre for Global Equality (CGE), the ‘Open-Seneca’ project is a good example of citizen science; this is a student-led initiative.  CGE evolves innovative solutions to global challenges; aiming to solve problems that undermine the wellbeing of the poorer half of the world’s population. Focusing on people who live on less than $3 a day, CGE projects facilitate collaboration between business, academia and civil society, drawing particularly on the University of Cambridge and companies in the Cambridge Cluster.

Nairobi suffers from high levels of air pollution and smog, but the local population is largely unaware of the consequences of this, and the city has no reference monitoring stations. In collaboration with the University of Nairobi, Open-Seneca is therefore helping scientists and citizens build air quality monitors so that participants can measure their air pollution exposure in a bid to raise awareness, initiate behavioural change and inform policy.

Open-Seneca scientists from Cambridge have visited maker spaces in Nairobi and provided training on the assembly and operation of air monitors that are comprised of Alphasense gas and particle sensors, a Raspberry Pi microcomputer, and a GSM/ GPS module. Local stakeholders have now taken ownership of monitoring the citizen based air quality network.

Interest in air quality is building, both politically and in the media. Awareness of the issues relating to air quality is also growing, and will continue to grow as more monitoring networks are installed and as more citizen science projects are instigated. This will increase pressure on governments and local authorities to implement measures that will improve air quality, especially in towns and cities.

As explained above, monitoring underpins awareness, engagement, town planning and mitigation strategy, so the emergence of reliable low cost sensors is vitally important because it is the key technology needed for effective air quality monitoring.

The removal of polluting vehicles from urban areas is essential, and whilst this can be achieved with low emission zones, the challenge will be to remove the need for such vehicles by developing appropriate transport infrastructure, facilitating the adoption of electric vehicles and by exploiting the potential of autonomous vehicles so that fewer vehicles are necessary.

Combined, these measures, along with the mitigation of pollution hot spots, will lower urban air pollution and reduce GHG emissions. With the benefit of low cost air quality sensors, we will be able to track the success or otherwise of such measures.