At Environmental Defense Fund, we’ve worked with community and research partners to map air pollution at the block-by-block level and found that hyperlocal data can reveal pollution hotspots and variability within cities and neighbourhoods that would otherwise be missed.

Building on this research, our latest work in the San Francisco Bay Area in California shows how the health impacts from air pollution can vary at a hyperlocal level and how using local-level data can greatly improve our ability to identify health disparities and target action.

Our findings illustrate why it is important to incorporate health information into such decision-making, as both pollution exposure and health vulnerability influence the health impacts of air pollution.

These insights have relevance not only for actions at the national level but also for cities around the world that are seeking to reduce air pollution and address health inequities. 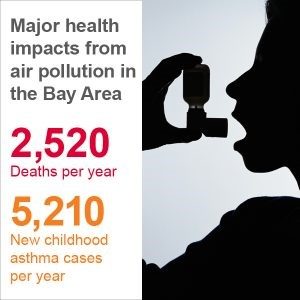 Our analysis, conducted with George Washington University and recently published in Environmental Health Perspectives, revealed the enormous toll that air pollution takes on health across the Bay Area.

We estimated that traffic-related pollution is responsible for more than 2,500 deaths and 5,200 childhood asthma cases every year.

These impacts vary dramatically from street to street. Within the Bay Area, certain areas experience death rates from pollution that are more than 30 times higher than other areas.

Further, there are major disparities in these impacts across racial and ethnic groups.

On average, Bay Area neighbourhoods with higher percentages of people of colour experienced double the rate of childhood asthma from traffic-related pollution compared with neighbourhoods that were predominantly white.

This disparity reflects the higher air pollution levels faced by communities of colour, a burden driven by decades of discriminatory housing and planning policies and disinvestment.

How air pollution impacts health is not solely a result of the level of pollution, it is also influenced by underlying health disparities.

That’s why health impact assessments, like our study, use information about existing health conditions and population distribution, along with air pollution concentrations, to estimate impacts.

By incorporating information about existing health status, these assessments shine a light on how air pollution adds to the cumulative burden in neighbourhoods with greater vulnerabilities.

In developing mitigation policies that seek to reduce health disparities, it is critical that stakeholders consider data on both population health vulnerability and pollution exposure, rather than relying on air pollution data alone to inform decisions.

Estimates of air pollution’s health impacts are often reported at the national scale, using modelled air data and regional or national health rates. This scale of reporting can mask important differences in impacts across regions, cities, and neighbourhoods.

By using hyperlocal air measurements from mobile monitoring and health data at the census block group scale, our analysis uncovered disparities and hotspots of impacts that would not have otherwise been recognized. We found that using less-detailed health data would’ve underestimated the number of deaths attributed to pollution by up to 50% in our Oakland, CA study area.

The below figure compares maps of the death rates from air pollution in West and Downtown Oakland using different scales of data – moving from less-detailed (on the left) to more-detailed (on the right). The map on the left, which does not reflect local pollution and health data, misses health risk hot spots and underestimates the magnitude of disparities. 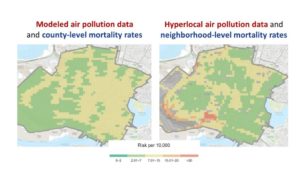 Policies to address air pollution will be more effective at reducing inequities when they are informed by local health and air data, at a scale that captures disparities.

This local data allows decision-makers to prioritize actions that will have the greatest health benefit and help those most at risk.

For example, this could include investing in electrification infrastructure (e.g. charging stations) in areas that face a particularly high health toll from pollution. The collection of better baseline health data and more air pollution monitoring could greatly improve these efforts.

And, as has been clear from attention at the federal level in the US on this issue, there is growing understanding of the importance of data for developing equitable policies to reduce pollution and protect health.

While gaps and challenges remain in replicating and improving the analysis we conducted in the Bay Area, the implications of the research are directly relevant for policymakers at every level that are seeking to reduce inequities in air pollution’s impacts.

These findings demonstrate the importance of incorporating health data – ideally at the local scale – into policies and tools that seek to identify and prioritize areas where air quality needs to be improved.