EVs cheaper on average than petrol or diesel equivalents

Some electric vehicles (EVs) are cheaper over a seven year-period than a petrol or diesel alternative, according to research conducted by LV General Insurance.

The researchers examined the purchase, financing and running costs for nine popular EV models and their petrol and diesel equivalents.

They found that three of the nine EVs: Nissan Leaf, WV ID3 and MG ZS EV were cheaper.

The MG ZS EV had the biggest long-term savings – £13,316 on outright purchase over seven years, £5,772 via a standard lease agreement over four years and £2,320 via a standard PCP arrangement over three years.

The savings on EVs is heavily driven by lower annual running costs. With EV drivers saving an average of £109 per month.

Additionally, with electric cars traditionally having a longer life span and requiring less maintenance, the savings can be even bigger. 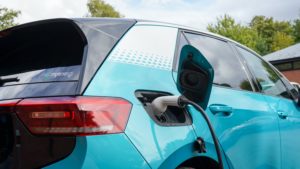 EV owners also currently benefit from not having to pay car tax, meaning that over the seven-year ownership period they can save over £1,000.

Furthermore, since Benefit-in-Kind for electric company cars is taxed at just 1% in 2021/22, there are also considerable savings for people able to purchase or finance a company car through their employer.

Alex Borgnis, head of motor underwriting at LV General Insurance, said: ‘With this new Electric Car Cost Index we’re really trying to show, in the most comprehensive way, how the costs breakdown for people considering taking the plunge and making an electric model their next car.

‘While the initial purchase will seem intimidating for some, once you break down the monthly costs, especially on a lease or PCP, and then throw in the lower running costs each year, suddenly it becomes something that provides great value over the course of the ownership period. You really don’t need to remortgage to get yourself on the electric car ladder!’