Residents and parents have given positive feedback to nine School Street trials that have taken place across Oxfordshire since March 2021.

Oxfordshire County Council has been working with walking and cycling charity Sustrans to implement the School Streets across the county.

The pilot schemes saw roads closed to traffic at drop-off and pick-up times at the following schools:

Of the 500 residents and parents and 112 pupils who completed the survey, 59% said they supported the School Streets.

60% of pupils said they said the road outside their school felt safer or much safer during the trial. 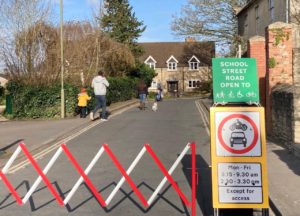 Cllr Mark Lygo, Oxfordshire County Council’s cabinet member for public health and equality, said: ‘We know that without safer streets, many children and their parents will not have the confidence to cycle or walk.

‘I’d like to thank Sustrans alongside the many volunteers and school staff that have contributed to the School Streets trials across Oxfordshire. Valuable things have been learned from the trials, which we hope to develop for the longer term to help encourage cycle journeys by children and their families whilst helping to reduce traffic.’

Sarah Leeming, head of delivery at Sustrans, added: ‘It’s been amazing to see whole school communities get behind the School Street trials – the support from headteachers and volunteers has been fantastic.

‘Pupils, parents and residents reported that the area outside the school gates felt safer. I hope that the successful outcome of the trials will provide confidence for local leaders to make the case for more School Streets across the county.’

The council hopes to continue with School Street trials, however, the trials depend on the availability of volunteers to marshal the scheme.

Anyone interested in taking part in a future scheme can email the council to find out more information.