Campaign group Mums for Lungs have warned that the expansion of London’s Ultra Low Emission Zone (ULEZ) is not enough to reduce dangerous levels of nitrogen dioxide (NO2) pollution.

The group of London-based Mums have used stencils across the capital to warn residents of dangerous levels of air pollution.

The stencils point to 15 air quality monitors that recorded illegal levels of NO2 in 2020.

Some of these routes are beyond the ULEZ expansion, including in the boroughs of Kingston and Merton, this is leading the campaign group to call for a further expansion.

Nine of the locations are also on or are adjacent to the city’s Red Routes – a network of major roads managed by Transport for London. 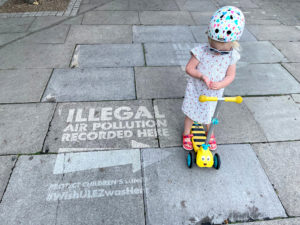 Jemima Hartshorn, a parent who lives in south London and is part of the Mums for Lungs group, said: ‘Even during the pandemic when London’s roads felt empty for months, it’s astounding to see that so many areas were still illegally polluted in 2020.

‘We are grateful for the Ultra Low Emission Zone and the October expansion is critical to protecting kids’ health. But initial data from 2021 indicates many of these sites will continue to exceed legal limits, highlighting the inadequacy of existing plans to reduce pollution. We need firm proposals for a diesel-free city.’

Lucy Facer, co-founder of the Islington Clean Air Parents added: ‘With two children who attend school and nursery within 25 metres of the busy and highly polluted ULEZ boundary road in Islington, I am constantly worried about the damage being done to their health.

‘The expansion is a vital step towards reducing pollution, but we need much stronger action to be taken and to prevent chronic health issues in children such as asthma which my son suffers from.’

In related news, Air Quality News talks to Jemima Hartshorn, founder of Mums for Lungs to find out more about the campaign group.

Have you seen the UK vehicle emission test failure stats?

I agree, we need to lower emissions, but how many groups mention renewing homegas boilers or fail to lobby the government to bring in two mandatory emission tests for all vehicles, including six month old vehicles?
Taxis and private hire vehicles are mandatory tested, in some council areas up to 3 times a year, so if they fail, it’s corrected, but what about other vehicles, some not being tested until 3 years old, yet as one private hire driver / owner found on its first 6month compliance / emission test, it failed (private hire vehicles and taxis can be mandated to take and pass 3 tests per year,he got it checked at another garage and again it failed again, so he got it fixed!

So how many vehicles are failing to pass any Euro 3,4,5 and 6 emission tests?

We can all play a part in reducing emissions!