Funding to improve Glasgow’s sustainable transport network has been secured, after the Council’s City Administration Committee approved plans to increase safety for cyclists.

The Council is set to receive an additional £4.8m in grant funding from Strathclyde Partnership for Transport (SPT), Smarter Choices Smarter Places (SCSP), and Cycling, Walking and Safer Routes (CWSR).

The funds will be used to expand Glasgow’s cycling infrastructure and increase the number of cycle routes, as part of the Council’s Strategic Plan for Cycling.

As part of plans to improve the safety of cyclists, Glasgow City Council has also introduced high visibility electronic road signs at 16 locations, which activate automatically as a cyclist approaches a junction, with further sites being considered. 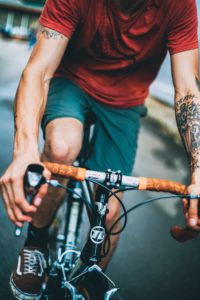 In addition, public transport funding will be used to enhance the city’s bus infrastructure, helping to ease congestion and reduce emissions across Glasgow.

Cllr Anna Richardson, city convener for sustainability and carbon reduction, said: ‘As we look at ways to encourage Glaswegians to shift towards more sustainable methods of transport, we need to ensure that the city has the right infrastructure in place which will allow people to get around safely and easily.

‘When it comes to cycling, safety has been one of the key concerns raised by many of Glasgow’s residents. We hope these improvements will encourage people to get out and enjoy the benefits which active travel can bring, across almost every aspect of our lives, from improved air quality, lower congestion alongside helping to improve citizens physical and mental wellbeing.

‘It’s also worth mentioning that Glasgow City Council were the first local authority in the UK to install electronic Cycle Activated signage at junctions, improving the visibility of cyclists as they travel around the city. The additional funding will help support our ambitions to becoming net-zero carbon by 2030 as we look to ensure our place as one of the most sustainable cities’ in Europe.’

Something is new for me, I read it and gain a lot of information. Thanks