Forest fires are linked to tens of thousands of avoidable deaths, according to researchers at the University of Leeds.

Across Southeast Asia, farmers burn forests as a way of clearing land for cultivation or for animals to graze. These fires generate a range of harmful pollutants, including particulate matter (PM2.5).

In order to assess the impact of these fires, the researchers used air pollution measurements with computer models to measure the impact of the fires on air quality and the prevalence of disease.

Using epidemiological modelling the researchers predicted that if all burning was stopped PM2.5 pollution would fall by between 40-70%, which could prevent 59,000 premature deaths each year.

The researchers also mapped poverty data against PM2.5 concentrations and found that poorer, rural populations in Laos, Cambodia and Myanmar were exposed to higher levels of fine particle pollution. 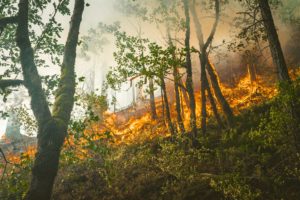 Dr Carly Reddington, lead author of the study said: ‘The study shows that air pollution from vegetation and forest fires seriously degrades air quality in Southeast Asia and that by preventing these fires, exposure to harmful air pollutants could be substantially reduced and many premature deaths could be avoided.

‘A complete ban on the use of fire may not be practical for many local farmers who don’t have any alternative. Pollution emissions are dominated by the burning of forests, so there needs to be increased effort to reduce fires associated with deforestation.

‘These local and regional benefits may provide a powerful incentive to reduce deforestation. Increased support for community-protected forests and other protected areas, where forest clearance fires are less prevalent, is an important way to reduce fires.’