One-third of the world’s countries have no legally mandated outdoor air quality standards, according to a new report published by the United Nations Environment Programme (UNEP).

The report, which examines national air quality legislation in 194 states and across the European Union, found that standards often misalign with World Health Organisation (WHO) guidelines.

Where such laws do exist, standards vary widely with 49% of the world’s countries defining air pollution exclusively as an outdoor threat.

Furthermore, the report finds that institutional responsibility for attaining standards is weak. Only 33% of countries impose obligations to meet the standards and only 31% of countries have legal mechanisms to address cross border air pollution.

Additionally, at least 21% of countries that do have the power to introduce such standards are yet to adopt them.

Inger Anderson, executive director of UNEP said: ‘There will be no jab to prevent seven million premature deaths caused by air pollution each year, a number poised to grow by more than 50% by 2050. ‘The air we breathe is a fundamental public good, and governments must do more to ensure it is clean and safe.’ 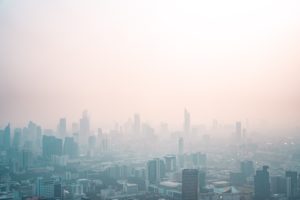 The right to a healthy environment, including clean air, is a precursor to achieving the Sustainable Development Goals on good health, affordable and clean energy, sustainable cities, responsible production and life on earth.

Professor Eloise Scotford, who co-authored the report said: ‘The study demonstrates that ‘even the most admirable national air quality objectives must be supported with strong institutional frameworks, implementation capacity and well-coordinated laws, if they are to be effective.’