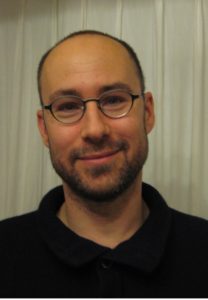 Ben Veilhelmann is a lead scientist at ESA supporting the development of the Copernicus satellite missions Sentinel-4 and Sentinel-5. Copernicus is the European’s Earth Observation programme, which looks at our planet in order to provide information services on a range of themes, including ocean, land, climate and atmosphere.

The Sentinel-5 Precursor is the first Copernicus satellite dedicated to providing atmospheric composition observations and is a collaborative project between the ESA and the Netherlands Space Office, costing around €220m from design to launch.

‘Such satellite missions are usually set up in a multinational context,’ says Ben, ‘it is much more efficient to join forces.’

On board the Sentinel-5 Precursor satellite is the Tropospheric Monitoring Instrument known as TROPOMI. This instrument looks specifically at the troposphere, the part of the atmosphere that is directly relevant to the air we breathe. The TROPOMI instrument launched in 2017 and has since orbited the Earth 20,000 times, travelling at a speed of 7.5 kilometres per second, and observing the composition of our atmosphere with daily global coverage.

‘My role is to overlook the development process of such satellites and run the necessary scientific developments,’ says Ben.

The TROPOMI instrument measures, amongst others, nitrogen dioxide, ozone, methane, and carbon monoxide. This data allows scientists to assess trends and spatial patterns in air pollution on a local and global scale.

‘While the emissions of air pollution can be local, the pollutants can travel quite far, this means that air pollution is by no means a local problem. 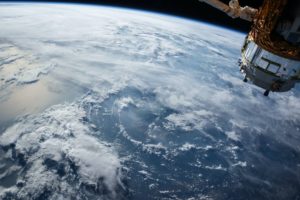 ‘The satellites cover entire continents and give us a synoptic view; they can capture events that are simply not captured by local monitoring stations.’

Using satellite data to look at global air pollution patterns has never been more important. Over the past two years, international lockdowns and massive wildfires globally have caused significant volatility in air quality.

‘If I asked the entire global industry to switch off their engines for a month for the sake of studying the Earth system, they would never agree. But this is exactly what happened.

‘This data is helping us to improve our quantitative understanding of the link between emissions and pollution levels.

‘The European Union recognises that air pollution is a large-scale problem that affects everybody and that having clean air to breathe is an essential need.’

The EU has issued directives that set air pollution limits and national emission ceilings. The data from the atmospheric Sentinels is used to monitor weather pollution levels and emissions are in line with these directives. This data can support policy makers so they can assess the effectiveness of air pollution reduction measures, but another important goal is to support local air quality services.

‘For example we have the airText service which informs citizens in London and Riga about the current and forecasted air quality,’ explains Ben.

‘Such information can be vital for people with respiratory conditions who can decide to stay inside if the air quality is bad on a specific day. Air quality services are emerging, similar to the weather forecasting services that are established across the world.’

The data collected by the satellites is also used to look at how these air pollutants interact with the climate.

‘The topics of air quality and climate change are interrelated,’ says Ben.

‘If you look at nitrogen dioxide (NO2) for example, this is one of the main drivers of air pollution because it is toxic in itself and it  controls the production of ozone, particulate matter and smog.

‘At the same time, NO2 is relevant to climate: it indirectly affects the Earth’s radiation balance via the light absorption by ozone and by the changes in cloud properties. Ozone is a key player for air quality because it attacks all bio-tissues including the lungs and skin, but it also attacks plant tissue, meaning it reduces the growth of plants and affects their uptake of the greenhouse gas carbon dioxide (CO2).’

However, the research on ozone doesn’t end with the ozone pollution itself. The ESA scientists are also dedicated to monitoring the ozone hole, which was discovered in 1985 and has since become a centre of research in the atmospheric world.

The long-term data series from the ozone monitoring satellites indicates that the ozone depletion has significantly slowed down or even come to a halt. This trend is largely due to the success of the Montreal Protocol which banned the use of ozone depleting substances.

‘In a world where climate problems are accelerating and it seems that the targets we have previously set are not achievable anymore, I think it is really important to highlight that coordinated action can move things in the right direction and that there is always room for maneuver.’