Social norms influence how people respond to wildfire smoke, according to researchers at Stanford University.

As wildfires become commonplace, checking the air pollution data is becoming as routine as checking the weather. However, how people respond to this data differs from person to person.

In order to understand different reactions, researchers at the University of Stanford interviewed residents across age, race and income demographics who were affected by wildfire smoke.

The lead author of the study, Francisca Santana said: ‘It’s important to understand how people behave so that public health communications professionals can potentially intervene and promote safer behaviour that mitigates risk.’

The researchers found that individuals responded to wildfire smoke in three main ways: interpreting information together, protecting vulnerable others and questioning protective actions.

They also found that social norms were really influential in how people chose to act on their perceptions of threat. For example, people who observed others wearing masks were often influenced to wear a mask themselves. 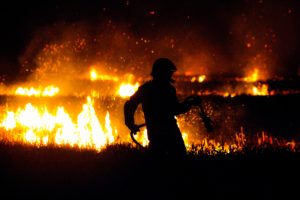 It is hoped that this study will provide a framework for better understanding wildfire smoke responses by examining social processes while also acknowledging that cultural and political contexts may also influence behaviour.

As these events become more common, the researchers have said that this data provides an opportunity to find policy synergies that help prepare communities for future smoke events.

For example, programmes that are designed to improve household comfort and increase energy efficiency could also include measures to reduce smoke intrusion during wildfire smoke events.

‘This research shows that social norms may be an effective lever for encouraging the pro-health change that we’d like to see,’ said assistant-professor Gabrielle Wong-Parodi.

‘That is actually a really promising sign for thinking about how to adapt and mitigate our risk as we’re facing increasing threats from climate change.’

I feel we are missing the point. Stop the smoke at the source. Jump on wildfires with sufficient resources the minute they start.Then we can all enjoy, “…household comfort…”

And it doesn’t apply just to wildfires, it also applies to wood heaters, back yard burning, any smoke source. Jump on it and put smoke out at the source.