The majority of residents in Leeds support a future where you ‘don’t need a car.’

Following on from £380m worth of infrastructure improvements, Leeds City Council has set out further plans to transform transport over the next 10 years.

The aim of the Connecting Leeds Transport Strategy is to create a city where you don’t need a car, and where everyone has access to affordable, low carbon and healthy transport choices. 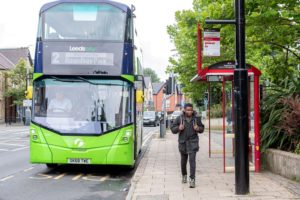 The majority of public consultation responses endorsed the approach, from over 1,7000 responses, 70% agreed with the levels of ambition and vision.

The feedback also found that more needs to be done to reduce transport carbon emissions, but promisingly 58% of replies said they are willing to change to a lower carbon mode.

Leeds City Council Leader Cllr James Lewis, said: ‘This transport strategy will enable Leeds to retain its role as a local, regional, and national transport hub and prepare the city for the arrival of high-speed rail.

‘We will continue to work and support the newly elected Mayor, alongside our joint efforts to transform the bus network. Maximising the transport investment, our approach will ensure benefits are distributed across the city and wider city region.

‘We will need support from all partners and communities across the city to achieve these ambitious plans; most importantly we will need significant government support and long-term funding.

‘There’s more we can do to improve everyone’s experience of travel in our city and that journey starts within local areas. Creating healthier streets that are safer, greener, and accessible to all and delivering local schemes will be a priority.

‘We need to continue to get people to move away from their cars to reduce air pollution and deliver an affordable, reliable, safe and zero carbon public transport network for the city which supports streets for people and unlocks the power of transport for a fairer, greener and a more prosperous Leeds.’