A second ‘green wall’ has been installed in London as Transport for London seeks to reduce the impact of locally generated pollution.

But, the wall has been criticised by a leading air quality lobbyist as “greenwash” for “failing to tackle emissions at source”.

The latest green wall has been installed close to the The Mermaid theatre, in Blackfriars. 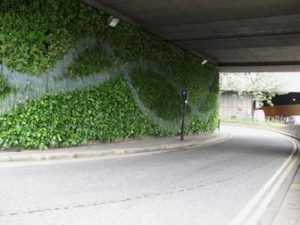 TfL said the 120m2 wall is made up of 15 plant varieties “designed to reduce locally generated pollution, particularly from nearby busy roads”.This is Transport for London’s (TfL) second green wall in the capital following one installed on Marylebone Road at Edgware Road Tube station last year. The green walls are part of a package of targeted short term measures which TfL is introducing at places where PM10 levels are at its highest. Other initiatives include the use of dust suppressants, tree planting and the use of cleaner buses.

And, TfL also points to other work it has instigated, including “London wide schemes to cut pollution such as an age limit for taxis and tighter standards for the Low Emission Zone.”

Commenting on today’s announcement of the second green wall, Simon Birkett, Founder and Director of Clean Air in London, said: “Just weeks after the World Health Organisation classified diesel exhaust as carcinogenic to humans, the Mayor is calling it ‘dust’ and trying to catch it on leaves. Please will the Mayor stop this ‘greenwash’ and put all his available resources into reducing harmful emissions at their source.”

TfL said that preliminary data gathered from the Edgware Road site by scientist Dr Linda Davies and her colleagues from Imperial College London, suggests these green infrastructure features are successful at capturing some airborne pollution. The team collected leaf samples from the green wall for five months since its installation in order to evaluate their ability to trap airborne particulate matter. An initial analysis showed that all 15 varieties of plants have been able to trap pollutants, although some have been more effective than others.

Matthew Pencharz, the Mayor’s environment advisor, said: “The Mayor is taking a range of robust measures to cut pollution. Green infrastructure is an innovative approach that provides a practical way to absorb dust from road vehicles and an attractive feature. We have installed several walls to test which plants work best and we want to share this knowledge to encourage their wider uptake.”

Dr Linda Davies, Imperial College London, said: “Results so far show some plants capture particles better than others, and small hairy leaves appear to do this the best. Green walls offer a wide range of environmental benefits such as helping cities keep cool and providing a haven for wildlife.”

TfL has also provided Crossrail with funding to install green screens at five of their constructions sites. These screens are part of the hoardings which surround the working sites. Four of the green screens are in place at Park Lane, St George Street, Hanover Square and Finsbury Circus, a further screen will be installed later this year on Farringdon Road.

Having invested in these trial sites, Transport for London is in discussions with other businesses where third party funding is available in order to deliver additional green walls including sites in Victoria and Chiswick.