Sulphur dioxide emissions from shipping have sharply decreased in EU ports thanks to a policy which limits sulphur content in fuels, according to the European Commission’s Joint Research Centre (JRC).

JRC scientists measured key air quality parameters in Mediterranean harbours before and after the entry into force of the low-sulphur requirements in January 2010. In European harbours they found an average decrease of 66% in concentrations of sulphur dioxide, a chemical compound that poses risks to health and the environment. Measurements taken in a non-EU port showed that levels of this noxious substance remained the same. 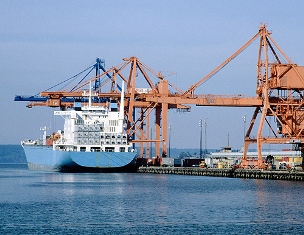 The 2005 amendment of Directive 1999/32/EC required that, as of January 2010, all ships at berth or at anchor in European harbours use fuels with a sulphur content of less than 0.1% by weight, while previously, outside of Sulphur Emission Control Areas, a sulphur content of up to 4.5% was allowed.

Background Sulphur dioxide is one of the main chemicals responsible for formation of acid rain and particulate air pollution – a major risk factor for cardiovascular and respiratory diseases.

The air quality measurements were carried out using an automated monitoring station on the cruise ship Costa Pacifica which followed a fixed weekly route in the Western Mediterranean during 2009 and 2010. The concentrations of sulphur dioxide were found to decrease significantly in three out of the four Mediterranean EU harbours that were investigated: Civitavecchia, Savona and Palma de Mallorca; the daily mean concentrations in all of the harbours decreased on average by 66%. JRC measurements in the harbour of Barcelona were inconclusive because of large day-to-day concentration variations.

However, independent measurements from monitoring stations in the harbour of Barcelona and in the vicinity of the harbour of Palma de Mallorca confirmed a strong decrease in sulphur dioxide concentrations from 2009 to 2010. In contrast, no decrease in sulphur dioxide was observed in the Mediterranean harbour of Tunis, and there was no reduction in any of the other air pollutants that were measured in all four harbours (Civitavecchia, Savona, Palma de Mallorca and Tunis). This shows, according to the JRC, that the decreases in sulphur dioxide are a ‘direct consequence’ of the application of the EU requirements.

It also confirms a correlation between sulphur dioxide and chemical elements typically emitted from ship stacks which the JRC said demonstrates that ships were the main source of sulphur dioxide in the harbours. The logistics for the automated ship-borne monitoring station for air pollutants used in this work were provided by Costa Crociere and the measurements were performed in collaboration with scientists from the Universities of Genoa and Florence, the INFN-LABEC Laboratory in Florence as well as from the Institute of Environmental Assessment and Water Research in Barcelona.

In line with the broader environmental protection objectives of the EU and strengthening a parallel agreement reached by the International Maritime Organisation, the European Parliament and the Council have come to an agreement to be submitted to formal vote after the summer on an amendment to the 1999/32/EC directive to further reduce sulphur content of fuels used outside of harbours.