The second Low Emission Zone (LEZ) to be introduced in the UK outside of London has come into force in Oxford, affecting buses driving though the city centre.

The city’s bus engines have been upgraded to meet EU Euro 5 exhaust emission standards in order to comply with the new LEZ, which came into force on January 1 2014. 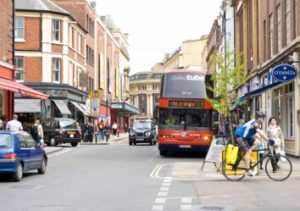 The Oxford Bus Company, Stagecoach, Thames Travel and National Express have all invested in improving the engine standards of their buses to comply with the regulations and improve local air quality. If they do not comply, the companies face losing their licences to operate in the city.

Oxford’s LEZ was developed in response to Oxford city council’s last Air Quality Action Plan (AQAP) in 2006. A new AQAP with provisions for an LEZ then followed after public consultation, which includes measures to tackle air pollution in the city up to 2020.

The LEZ is the UK’s second outside London, after Norwich’s small city centre LEZ put in place standards for nitrogen dioxide emissions from local buses in 2008.

This followed the introduction of an LEZ for a number of types of large vehicles – both commercial and private – in Greater London in February 2008.

Oxfordshire county councillor David Nimmo Smith, cabinet member for environment, said: “Oxford has some of the highest bus use in the UK, thanks to sustained investment by the councils and bus companies over several decades to create a first class bus and park and ride network.”

Councillor Smith also highlighted other initiatives out in place to tackle pollution, such as the Oxford SmartZone – an agreement between the county council and bus companies which from 2011 reduced bus flows in the city centre by up to 25%.

He added: “Buses are vital to Oxford’s economy and environment so I’m delighted to see the LEZ coming into effect to make the city’s buses even cleaner.”

However, while praising the introduction of the LEZ in Oxford, Green Party city councillor Craig Simmons said that the measures should apply to all polluting vehicles in the city centre – not just buses.

He said: “A LEZ is long overdue – air quality is continuing to deteriorate in the city centre. Our concern is that the limited measures proposed will have a minimal effect. It applies only to buses—many of which were already in service last year, when air quality again declined.  And there are several exemptions. There needs to be a clear plan to extend the LEZ to cover all polluting vehicles.”

Oxford Bus Company said it had invested over £15 million over the last five years in green vehicles, including state-of-the-art electric hybrid buses.

Philip Kirk, managing director of Oxford Bus Company, said: “They can cut fuel consumption by as much as 39%. This in turn reduces CO2 emissions by a similar amount. They also produce up to 50% fewer nitrogen oxides compared to traditional diesel engine buses.”