The UK motor industry has called on the London Mayor to “rethink” plans for an ultra low emission zone (ULEZ) in the capital from 2020 to enforce “more ambitious” emission standards for both petrol vehicles.

Transport for London (TfL) and the Mayor are currently consulting with the public over plans for the ULEZ – which would see only vehicles meeting specified emission standards being able to enter the Congestion Charge zone – until January 9 2015. 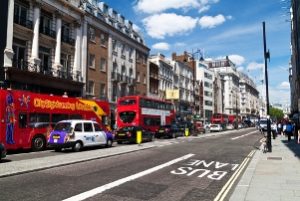 SMMT said it would support a ‘more ambitious’ ULEZ from 2020

The Society of Motor Manufacturers and Traders (SMMT) said it welcomed the ULEZ plans in principle but added that London should “set the benchmark for the world’s great cities” by implementing a scheme which “demands the very best in vehicle technology”.

In an open letter addressed to the Mayor, Boris Johnson, yesterday (December 16), SMMT chief executive Mike Hawes called for the ULEZ require the “latest European emission standards – Euro 6/VI – across all vehicle classes regardless of the fuel type”.

Advocating newer diesel vehicles as much improved for air pollution emissions compared to older models, Mr Hawes said that the industry had invested billions of pounds in the UK in developing the next generation of diesel engines to “reduce CO2 emissions and improve air quality”, and suggested that petrol vehicles should be forced to reach similar standards in the ULEZ.

Older diesel vehicle models are blamed for contributing high levels of nitrogen dioxide and particulate matter, but SMMT claims that diesel vehicles built today are the “cleanest ever made” and capture over 99% of particulates.

Mr Hawes therefore argued that amending the current ULEZ plans to enforce the latest EU emission standards would “encourage fleet renewal in the market, incentivise the uptake of the best in clean technology and create economic growth and jobs in London and the UK”.

Doing so, Mr Hawes wrote, would “accelerate improvements in air quality for all Londoners, safeguard jobs in the capital and ensure the ULEZ is simple for consumers to understand and endorse”.

However, the SMMT chief also stressed that while road transport is a “significant contributor to ambient air quality”, any effort to address this issue must be part of an “integrated approach” tackling both air pollutants and carbon emissions.

Last month (November 6), Mr Hawes also appeared in front of the London Assembly’s environment committee to discuss tackling diesel emissions in the capital, at which he said that diesel vehicles will “still be around for many years to come” (see airqualitynews.com story).

Responding to Mr Hawes open letter, Transport for London’s (TfL) managing director of planning, Michèle Dix, emphasised the air quality benefits of the current ULEZ plans and encouraged London residents to give their views on the proposals in the current consultation.

She said: “Improving the capital’s air quality is of paramount importance as it affects the health and well-being of every Londoner. That is why we are doing everything in our power to address emissions from road transport, with the introduction of an ultra low emission zone at the core of our work to improve the capital’s air.

“The ULEZ would significantly reduce the number of people living in areas of poor air quality – by 74% in central London, 51% in inner London and 43% in outer London. We would urge everyone who lives, works or travels in London to give us their views on the ULEZ public consultation, which runs until 9 January.”