Greater Manchester Combined Authority is set to spend £137m on its walking and cycling ‘Bee Network’ as the city region aims to become a world leader for active travel.

This means that the GMCA has now endorsed 42 such schemes, which will feature a total of 319 new and upgraded crossings and 70 miles of new cycling and walking routes.

Launching the plans in Leigh, one of the areas that will benefit from the scheme, the Mayor of Greater Manchester Andy Burnham, said: ‘This is a hugely exciting time for Greater Manchester – we’re just at the start of a process that will see us eventually compete with some of the world’s best and most liveable cities like Vancouver, Copenhagen and New York City.

‘Greater Manchester’s people, along with the 10 districts, have made it pretty clear that enabling more local journeys to happen without cars as part of a wider public transport offer is what is required to support the city-region on so many fronts – congestion, air quality, creating healthier and more connected communities.’ 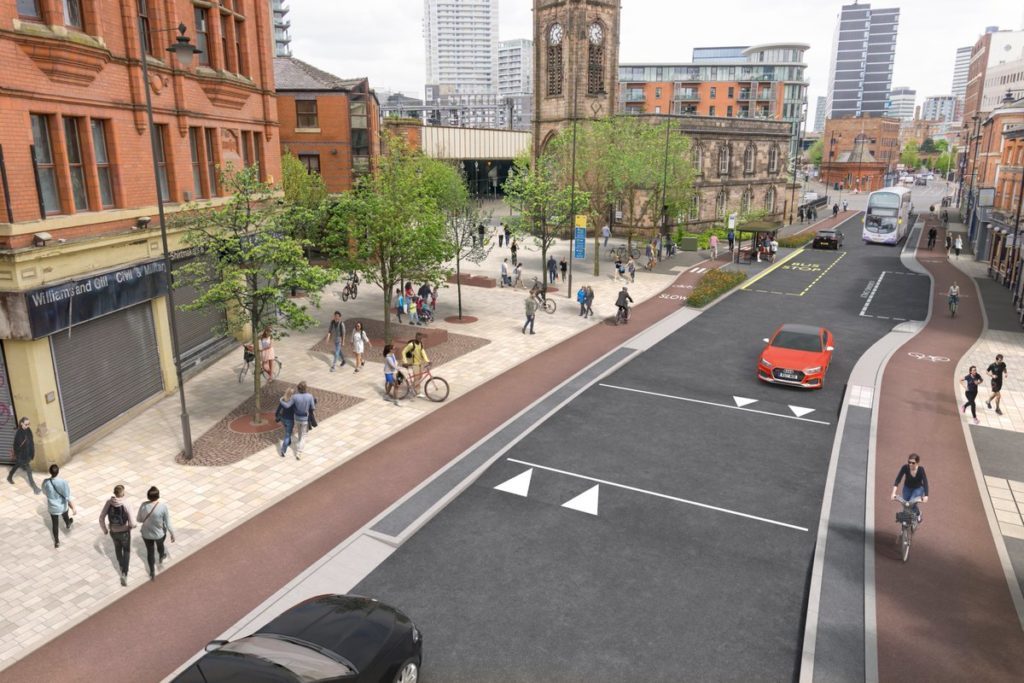 Among the new 18 schemes being proposed to GMCA in central Manchester are a £11.6m route between Manchester Piccadilly and Victoria train stations and a £6.4m walking and cycling corridor between Salford Quays and Manchester city centre.

Outside of central Manchester, £9m will go towards a new bridge linking Stockport railway station with the proposed new Stockport interchange while £14m will help develop walking and cycling routes in the Wigan towns of Leigh, Atherton and Tyldesley.

Two of the new 18 schemes will see the creation of active neighbourhoods in Ordsall, Salford and Levenshulme, Manchester, which will prioritise pedestrians over motor traffic.

Greater Manchester’s Cycling and Walking Commissioner, Chris Boardman, said: ‘The 42 schemes that are now on the books are truly transformational. We’ll get a real bang for our buck here in terms of the positive knock-on benefits that will be made possible by this investment.

‘Some of the projects, like the proposed active neighbourhood in Levenshulme, have been entirely community-led and driven; the idea for it started by its own residents. More trips on foot or by bike just happen to be a by-product of creating better places to live.’

Transport for Greater Manchester has also proposed looking into the possibility of using European-style zebra crossings on minor side roads to give way to those travelling on foot or bike.

TfGM believes these zebra crossing will be safer and cheaper than existing zebra crossings in the UK, which are only permitted where Belisha beacons and zig-zag markings are also in place.

If the new zebra crossings prove viable, the transport body may start lobbying the Department for Transport to convince it to make the change.

The Bee Network forms a key part of Greater Manchester’s plans to reduce its carbon emissions as the GMCA recently announced its plans to introduce a Clean Air Zone for HGVS, buses, taxis and vans from 2021.