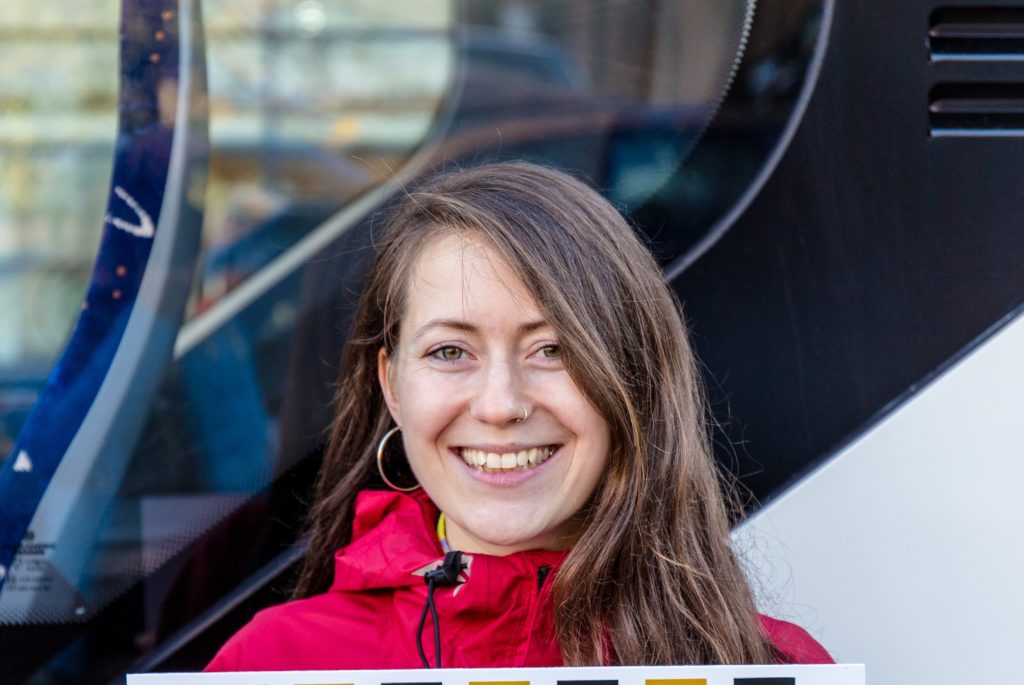 Pascale Robinson is the co-ordinator of the public transport campaign Better Buses for Greater Manchester (BB4GM).

The campaign, which started last year, is putting pressure on Mayor Andy Burnham to bring the city region’s buses back under public control.

AirQualityNews spoke with Robinson about how BB4GM started, the support the campaign has gained so far, and why she believes a re-regulated bus network would improve Manchester’s air quality.

What are the aims of the Better Buses for Greater Manchester campaign?

We’re calling on Andy Burnham to regulate our buses and that means bringing them into public control. That’s how London’s buses are run, and we think that’s really important for getting the really good bus system that Greater Manchester so desperately needs at the moment.

We have no control over our buses at the moment, and that has led to loads of issues with having a patchy network, an unreliable and expensive network, and a really dirty, polluting one too.

How was the campaign started?

We Own It set up and backs the campaign, and that’s an organisation that generally campaigns for public ownership of public services.

With this campaign, the aim was public control, and the reason they saw the opportunity is because legislation was passed in 2017 which lets local authorities with an elected mayor re-regulate their buses, and this is a huge step towards achieving better buses.

We’re funded by the Foundation for Integrated Transport and we’re basically pulling together a really broad coalition of passengers, staff, businesses – all sorts – to call on Andy (Burnham) to make that decision and pick us over shareholder fat-cats.

How is it going so far?

I think that we’re doing a really good job of showing Andy how many people are in support of this. People are so happy that we’re finally doing something because people are really upset and sad that their buses are letting them down.

[The bus companies have] set up a consortium called OneBus GM which is advocating for continued deregulation and voluntary partnerships. Those voluntary partnerships just aren’t good enough. They’ve not volunteered to deliver a great network for the past 30 years – in fact, they’ve delivered an increasingly worse one – and so now, we think it’s time that we brought our buses into public control and had buses like London. I think it’s really important that we keep up the pressure on Andy Burnham.

There is obviously a push at the moment for low-emissions buses and vehicles by 2030. Why are Greater Manchester’s buses part of the air quality problem there?

Greater Manchester has one of the most polluting fleets in the UK and I think that this is a perfect example of where regulation and public control would massively improve that situation and improve our buses.

The way deregulation works is that it’s very hard to force bus companies to do anything. They’ve not volunteered to provide clean or green buses, so we’ve got really old and polluting buses that are not up to EU standards.

It seems they want to refuse responsibility at all for their own fleet, and I think that re-regulation would allow us to demand that bus companies provide a clean, up-to-date fleet. In London of course, they’re well ahead of us, and they’ve got an aim by 2019 to make all double-deckers hybrid or electric. We’re not even close to that at the moment.

Would re-regulating the buses enable better emissions standards to be set?

The de-regulated bus network that we have at the moment means that we have literally no control over the buses that they put on our streets.

That’s what the Clean Air Programme at the moment is trying to tackle. It’s trying to force bus companies to upgrade their fleet and that’s only because central government has said to local government that they have to do this. What re-regulation means is that local authorities plan the network and they specify the service standards that we need. They could say that we need a fleet that is new and is not going to pollute the air.

Re-regulation allows you to have a lot more control over your bus service – you can demand everything from the colour of your buses, drivers’ pensions, the minute that your bus will arrive – it basically means a lot more control and that’s why I believe it’s so important for air pollution.

Bus companies haven’t volunteered to provide a clean fleet so we need to force them to – simple as that.

Do you think Manchester’s Clean Air Zone will work without re-regulation?

I personally feel that it will happen far too slowly, and I also think it is ridiculous that bus companies are saying they’re going to pass these taxes onto passengers. I think that really shows that they’re not stepping up the challenge of providing a clean fleet.

If we’re going to tackle the environmental and health impacts of air pollution then we need to really quickly upgrade the fleet and I think that we’re in a far better position to do that with a regulated publicly controlled network.

When will Andy Burnham make a decision on re-regulation?

We’re not certain, but we think he will make the decision in the next year – we’re hoping! There have been lots of delays already and we’re really hoping that decision will come soon.

Basically, Transport for Greater Manchester have been asked to pull together a case for franchising, so that’s everything like strategic financial delivery, then Andy Burnham has to consider that case along with the alternative: the voluntary partnerships which we think are just not good enough.

Then there will be a public consultation that will last for three months, then Andy Burnham will make a decision. At the moment, no one knows when that will be.

What is the future for Greater Manchester’s bus network?

If we re-regulated our buses I’m not saying that it would transform buses overnight. However, I think we could use public money far more efficiently to deliver more services, more affordable fares.

I think that we could force bus companies to upgrade their fleet really quickly, and it would be great to appeal to central government for more money, and I think we’d be in a much better position to do that if we controlled the fleet and we knew the buses [that] were going to be used on our streets.

I just think there’s so much we could achieve with a re-regulated bus [network]. We’ve seen in London’s bus network how successful that’s been.

London’s bus journeys have doubled since the time of de-regulation and 64% of journeys in London happen by public transport and walking, whereas in Manchester I think that’s only 13%, so we really need to get a grip on our buses, make them much better, and go from there.