A permanent biomethane gas filling station in Bristol has opened for the city’s growing fleet of biomethane buses.

The new station, at the Bristol Community Transport (BCT) depot in Bedminster will be used to fuel buses on the m1 metrobus route, which is operated by BCT under contract to First West of England.

The new station represents a £960,000 investment by First West of England, that has been supported by the Low Emission Bus Fund, from the government’s Office of Low Emission Vehicles.

First West will introduce 77 new biomethane buses to Bristol in the coming months.

The biogas that fuels the buses is provided by the Gas Bus Alliance (GBA) and comes from waste food and is supplied from anaerobic digesters across the UK.

The station was officially opened on Monday (July 1) by Bristol Community Transport Chief Executive Dai Powell and First West of England’s Managing Director James Freeman, and marks the end of a temporary filling station which had been fueling the fleet since it came into service in January 2019. 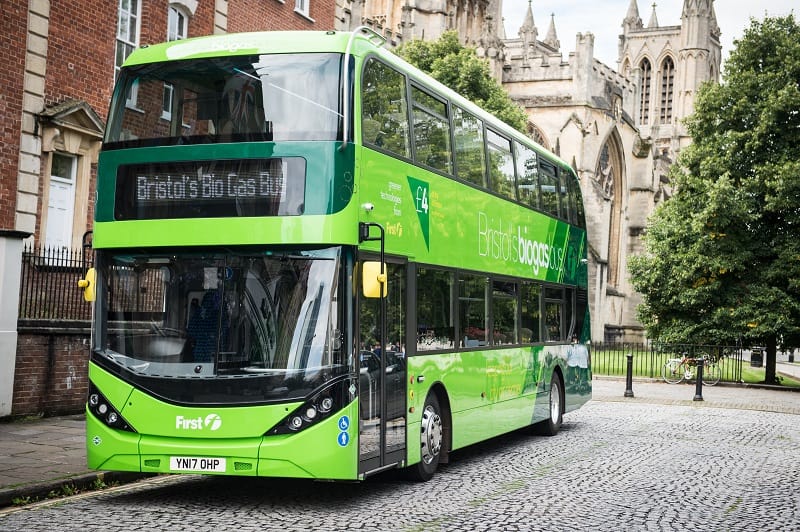 ‘That’s why we’re making significant investments to bring a fleet of bio-methane gas buses into Bristol, building on the legacy of the famous “poo bus”.

Earlier this week, Bristol City Council launched a public consultation on two options to reduce air pollution in the city.

In 2017, Bristol was one of the 23 local authorities ordered by government to bring forward plans to reduce illegal levels of nitrogen dioxide (NO2) emissions in line with EU air quality targets ‘in the shortest possible time’.

AirQualityNews interviewed Bristol Mayor Marvin Rees last month about his leadership on air quality which you can read here.