The South East Wales city of Newport is set to be the home of Wales’ first permanently operating zero-emission electric bus.

Newport Transport, the city’s main bus operator, has now received its first electric bus which will enter service around the city later this month.

The operator has ordered a total of 15 zero-emission single-decker buses, which it expects to fully roll out by March next year.

Once the buses are rolled out, one-fifth of the operator’s daily fleet requirements will be met by zero-emission buses, helping to improve Newport’s environment.

The bus has been funded by the Department for Transport after it announced £48m in funding for low-emission buses across the country earlier this year, including in Cardiff and Caerphilly.

Scott Pearson, managing director of Newport Transport added: ‘We’re delighted that after months of negotiation and preparation, we can finally operate our first zero-emission fully electric vehicle around the City of Newport.

‘With the next fourteen due to arrive in the first quarter of 2020, they will be a fantastic contribution to our fleet and will provide the people of Newport with an environmentally clean option for travel in and around the city.’ 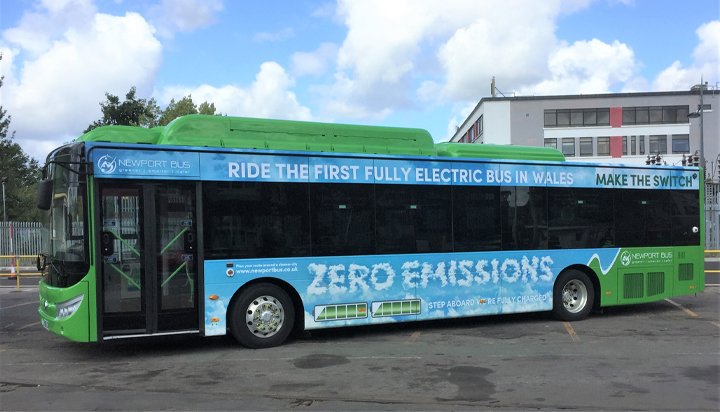 The buses are the result of a partnership between Newport Transport, the bus manufacturer Yutong and the energy company Zenobe Energy.

Zenobe will continue to own the batteries and charging infrastructure of the vehicles, while Newport Transport will buy the energy off them.

The buses will be able to travel 116 miles on a single charge which the company says will be more than enough for a day’s work.

Newport Transport says that the new buses will give passengers a smoother, quieter and more comfortable travel experience.

Steven Meersman, co-founder of Zenobe Energy, said: ‘We’re thrilled to be working with both Newport Transport and Yutong in the UK’s first end-to-end partnership of its type. Newport Transport are paving the way for the rest of Wales, by being the first to roll out fully electric zero-emission buses.

‘Not only will the vehicles be more efficient, lowering costs for Newport Transport in the long-term, but they’ll also support the UK wide ambition to be carbon neutral by 2050.’

Thanks to the DfT funding, Cardiff will get 36 new zero-emission buses next year, while Caerphilly is set to roll out 16 ultra low-emission buses.