The ‘good life’ used to be all about growing your own vegetables, but in the brave new world of the 21st century, even
self-sufficiency has had an upgrade.

Although the advent of putting solar panels on the roof of a house is nothing new, the latest advances in
smart technology mean your home could soon become a ‘mini renewable power station’.

‘By adding a smart meter, which accurately monitors the energy you’re using and tells you how much it costs in near real-time, you could also access new time of use tariffs. These can see you paid to use energy when there is an excess supply of energy, enabling you to charge your EV or home battery for free.’

A recent report by the energy platform Kaluza estimated that there could be 2m smart heating systems and 11m EV chargers in UK homes by 2030, and that households could save up to £400 a year by letting artificial
intelligence (AI) drive how energy is used. 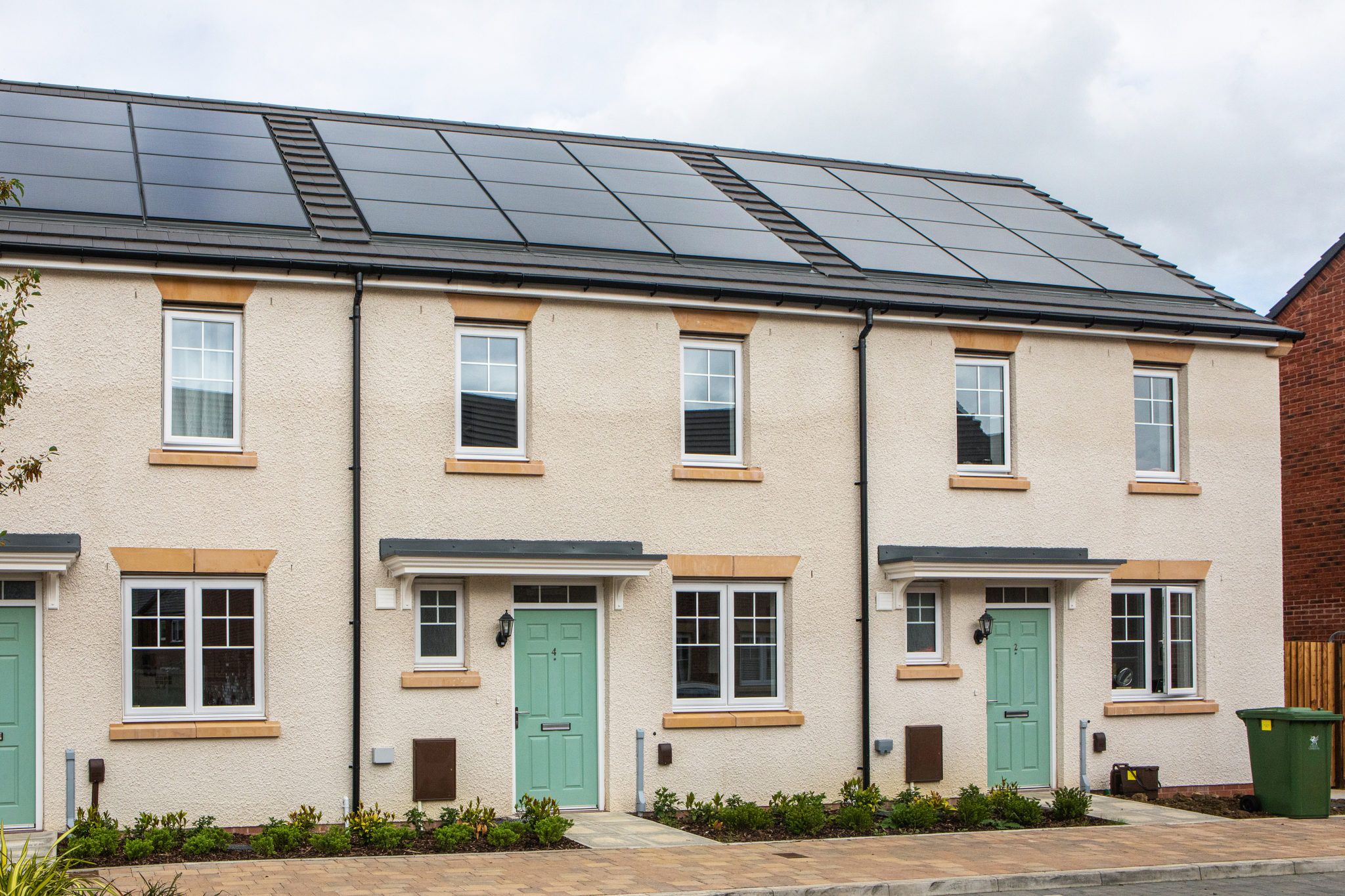 There have been a number of smallscale schemes to test the concept of the smart home energy system in recent
years. One of these is a housing estate in Parc Eirin, Tonyrefail, which is being developed by Sero Homes with
Pobl Group and Tirion Homes.

Sero has developed an advanced solution for heat, hot water, electricity and vehicle charging in the homes on
the estate, which is all linked to its Sero Life platform.

The estate has received funding from the Welsh Government and the UK Government and Western Power Distribution is running a trial of three phase power cables into the homes, which can carry more power than
traditional cables.

‘They all talk to a computer, which is hooked up to the smart meter, so it knows what tariff is being supplied to the house. The computer looks at what tomorrow’s weather is going to be and it’s got artificial intelligence so it’s
learning, day by day.

‘So, if you always use the washing machine on a Tuesday, it will look ahead and look to pull use the cheapest electricity rate. It’s designed to manage your energy consumption and keep your bills, as low as possible.

‘For example, if you have a typical gas-fired four bed house with an EPC rating of D or E, you could be paying about £190 on electricity a year. They are looking to drop that down to £90 for your first bill in a Sero Home. And after a year of the computer learning how you live, it could drop even further to £55. That’s a substantial saving to a household.’

Mr White says there has already been huge public interest in these smart energy homes.

‘I think the general public is actually going to wake up and realise that the goalposts have moved, and it’s in their best interests to go down this road,’ he tells Air Quality News.

‘The weakest bit of the network is between the mains in the street and the customer meter in the home,’ explains
Mr Jewell.

‘We’ve laid in three phase services to all of the properties on the estate to give that element of future proofing with more batteries and EVs. They may not need three phase cables now, but we just want to have something ready for the future.’

Mr Jewell says smart systems can help with the transition. ‘If you start with a sort of standard assumption that decarbonisation probably puts four times the amount of energy on the electricity grid than there is at the moment, in very broad

‘We haven’t got the time, the money or the capacity to build a network that is four times as big. So, what we have to do is use the network that was built for the existing peak usage and start filling in the space at times of lower usage at night and away from the early evening peak.

‘The best way to fill in those gaps is by using battery storage in the home to help store energy away after the peak times.

‘We’re expecting that when customers get electric vehicles, they will move to time of day tariffs, which will take them away from the evening peak periods because it’s cheaper to charge your car during the middle of the night than it is in the early evening. That’s great. Again, it takes a load away from that, that peak period for us and fills in some of the troughs in our network.’

One of the more intriguing ideas is the notion that you could run your home off an EV battery when electricity prices are high, which then could charge itself off the grid overnight when energy prices are much lower.

The technical term for this is ‘vehicle to grid’ or V2G, as it is sometimes known. At present, only the Nissan Leaf has the necessary tech to make this happen, but many argue that future generations of EVs will all have this capacity.

And then there is the idea that the National Grid could draw off a plugged EV and use its energy storage capability.

You might be thinking so what? Well, imagine if it could draw off thousands of EVs at the same time, which had formed a ‘virtual’ power station.

‘Vehicle-to-grid is a real game changer as we transition to an intelligent, zero carbon grid,’ says the managing director of OVO Smart Home, Jessica Tan.

‘Earlier this month, as National Grid issued a “margin notice”, a serious security of supply alert, OVO Energy members and their V2Gconnected EVs powered the grid,’ she adds.

‘OVO Energy called upon its V2G members to keep their chargers plugged in and help supply the grid with electricity stored in their EV batteries.

‘New modelling based on data from OVO’s V2G fleet shows that if the 164,000 EVs on Britain’s roads today were V2G-enabled, they could produce daily flexible capacity to boost enough supply to power 100,000 homes
and support the grid at times of tight energy supply margins.

‘And in the future, if just half of all EVs were V2G-enabled by 2030, this would provide at least 5GW of export capacity – estimated to be enough to meet approximately 77% of all annual system balancing needs including instances of tight energy supply margins,’ adds Ms Tan.

Simon Daniel, founder and chief executive of Moixa, which has developed its own Gridshare platform
to opitimise energy usage, says there are already enough EVs in Britain to provide around 8GWh of combined
storage, which is the same as the Dinorwig pumped hydro plant in Wales.

‘And as more people buy EVs, then very soon you could have tens of Dinorwigs on the grid, but sitting in people’s homes ready to be used,’ says Mr Daniel.

He believes home power plants could play an important role in managing the peaks the troughs on the grid as the UK moves to low-carbon energy.

‘At the end of the day, the UK is an island and a third of our energy comes from renewables, which is set to double over the next five years,’ explains Mr Daniel.

‘But it is not controllable generation. If there’s no sun or wind, then there’s a problem. Because we are an island,
we are more exposed to issues around intermittency on the grid. We don’t have lots of interconnectors to Europe.

Presently, the UK has around four GW cables connected to the continent, which means we can only get 5% or 10% of electricity from Europe.

‘Looking at the future, when we reach a point where 60% of our energy is renewable, the grid could be exposed. We will either need to have 30GW of cables to Europe or we need more storage here in the UK,’ says Mr Daniel.

“The technology to manage virtual power plants in people’s homes is therefore critical to how we manage nation states in the future. Countries like the UK will have to solve this problem because we don’t have the physical connections to our friends in Europe.’

The government’s recent announcement that sales of new petrol and diesel cars will end in 2030 might suggest that millions of EVs are about to hit the nation’s roads and driveways. In terms of managing ebbs and flows of the grid, that really could be a game-changer. But, just this once it’s not just about EVs.

Batteries for the home, or power walls, could play a huge role in helping homeowners became more savvy about their energy use, because they don’t require driveways or proximity to charging units.

Napoleon famously once said that Britain was a nation of shopkeepers, but who knows, maybe the UK will become a nation of electricity traders as well?