The bus was manufactured by Wrightbus, who enlisted the expertise of Luxfer to design, manufacture and supply the hydrogen fuel system that powers the bus.

The Aberdeen launch is part of the €32million EU-funded JIVE (Joint Initiative for hydrogen Vehicles across Europe) project, which is deploying 139 zero-emission buses and refuelling stations across five countries.

In the UK, Aberdeen, Liverpool, Birmingham and London will welcome the green fleets, with Aberdeen home to the very first double-deckers to operate. 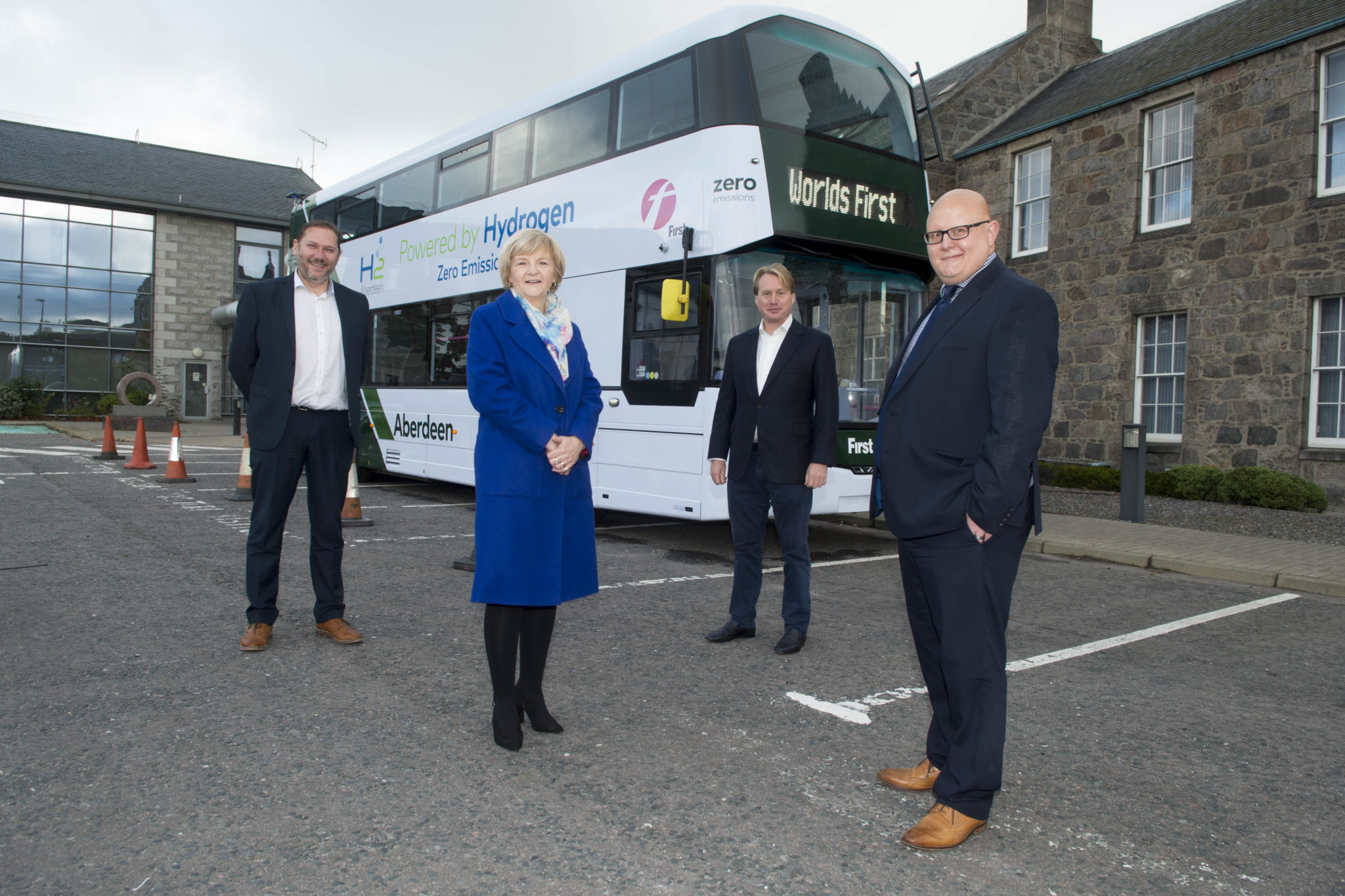 07/10/20
L-R Coucillor Douglas Lumsden, Councillor Jenny Laing, Jo Bamford, Wrightbus owner and Executive Chairman,David Phillips, Operations Director for First Aberdeen.
The world’s first hydrogen-powered double decker bus was revealed today in Aberdeen which showcases the city as a trailblazer in hydrogen technologies.The arrival of the first bus in the city underlines the city’s role as the energy capital of Europe and shows its commitment to the transition of green energy from oil and gas as part of the Net Zero Vision.The hydrogen double deckers will be spotted around the city for several weeks during a period of final testing along with training for drivers, with the buses expected to be in service next month.
The buses are as efficient as electric equivalents, with refuelling taking less than 10 minutes and offering a greater range. Water is the only emission from the vehicles which reduces carbon emissions and the new buses continues to contribute to the city’s commitment to tackling air pollution.

Mark Lawday, director at Luxfer Gas Cylinders said: ‘The hydrogen economy is now taking off, but it’s an area we’ve worked in for three decades.

‘Luxfer has pioneered hydrogen storage systems and valve technology, and we were brought into this project by Wrightbus in 2017 to help design how the hydrogen system could work to deliver the best range, in a cost-effective solution.

‘Aberdeen has been at the forefront of hydrogen, proving it is viable, and we worked with them on introducing an original fleet of 10 hydrogen buses to the city too. It’s fantastic that these new double-deckers will begin their journeys with passengers soon.’

Wrightbus chairman, Jo Bamford, added: ‘Everyone at Wrightbus is incredibly proud to see the world’s-first hydrogen double-decker bus fleet in full service and carrying passengers around the streets of Aberdeen. It marks a pivotal moment in the city’s commitment to reaching net zero.

‘We will see further Wrightbus hydrogen buses in locations across the UK, with fleets due to launch in Birmingham and London later this year. It’s vital that other towns and cities sit up and take note of their example.

‘Hydrogen has an important part to play in the decarbonisation of transport and the reduction in CO2 levels that we need to reach to ensure a net zero future, and we’re delighted to be working with Luxfer Gas Cylinders towards achieving this.’

In related news, Air Quality News editor Jamie Hailstone talks to JCB heir and hydrogen advocate, Jo Bamford, about why it is the fuel of the future for buses.