Steve Chambers, an urban planning and sustainable transport consultant, lecturer and campaigner, speaks to NewStart about the impact of car dependency on planning for new housing developments, and how this problem can be addressed for a more sustainable future.

His organisation, Transport for New Homes, is campaigning for planning reform to ensure that green transport is a priority for future housing developments.

Their recent ‘Homes without Jams’ campaign argues that the government’s proposals for new planning rules do not improve the rates of traffic and air pollution and may even worsen the situation. 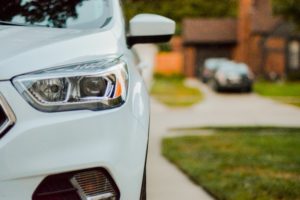 How does car dependency come about?

When a new housing development is planned, transport is considered as an ‘afterthought’, according to Steve Chambers.

The main issue is location – new builds are often located far away from existing settlements and do not generate enough trips to warrant local amenities, so residents must travel a long way to do basic things like visit the shops. This means that people living in new housing estates become dependent on cars to go about their daily lives.

Designs for new housing developments often do not consider barriers to walkability, with paths between separate developments not joined up properly or fences preventing residents from walking between estates.

According to Steve, often little thought is also given to core public transport when planning new housing, such as not looking into the timescales to get rail services in place or not adapting bus services to go into the estates and near to people’s homes.

Worryingly, Transport for New Homes has also noticed that land use is now being designed around the car, for example homes may have multiple parking spaces. This land is taken from somewhere else to accommodate vehicles, with houses designed in peculiar shapes to allow for more parking, or space taken from gardens to accommodate cars.

The problem with car dependency

Steve Chambers says the main issue with car dependency in housing developments is that it impacts how we use land and design homes: ‘We are literally designing around the car, not around people.

‘That’s an issue for people who can’t drive, especially if they have taken affordable houses, it’s an issue for young people and older people, it basically means you need to own more than one car as well.’

The quantity of cars in and around housing developments discourages walking and other forms of active transport, which is often made worse by designs that lead to housing estates which are difficult to navigate on foot or bike, such as a lack of joined up pavements and safe cycling routes.

Steve explains how using cars also reduces the quality of public transport services: ‘Having the car there crowds out all other services, so where there is a bus service it’s poorly used, and then it becomes a less good service, and then less people use it, and that vicious cycle continues.’

Our dependency on cars can also have dangerous consequences for our health, with a study from the Sydney School of Public Health finding that longer driving time was linked to insufficient physical activity, short sleep, obesity, worse physical and mental health, and higher odds for smoking. Travelling by car also increases your risk of exposure to air pollution, which can have a number of negative physical and mental health impacts. 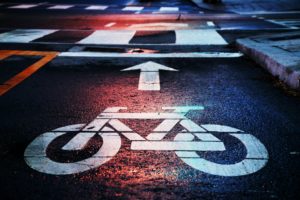 The environmental cost of cars

Transport is the number one source of greenhouse gas emissions in the UK, contributing to around 25% of carbon emissions, so tackling car dependency is crucial to fighting the climate emergency.

Research by Mobilityways suggests that 10bn kg of CO2 could be saved if people commuted by walking, cycling, taking public transport or car sharing – the equivalent of London’s total carbon emissions for almost four months.

The role of planning in making transport more sustainable has historically been ignored. However, the recent Department for Transport decarbonisation plan did identify that planning plays a role in achieving its environmental aims, although it did not make any promises for the Ministry for Housing, Communities and Local Government, who are responsible for planning reform.

Steve Chambers is concerned that the government is putting a lot of emphasis on electric cars as the solution to our environmental crisis.

‘We see a lot coming from government about how electric cars are going to fix everything. They are not going to fix the land use issues; they are still going to take up all that land. It will not have an effect on how these estates are designed around the car, it’s not going to fix the public health problems, and it does not fully fix problems around air pollution, and obviously there is still the issue of energy consumption and where that’s coming from,’ he said.

He also noted that one of the primary complaints Transport for New Homes hears from people living in these estates and around them is about congestion, which will not be solved by replacing petrol cars with electric vehicles.

What can be done?

There are three main ways that transport issues for new developments can be solved, according to Steve Chambers.

He added that solving transport issues in existing developments is possible through basic steps such as connecting estates and tinkering with street layouts and existing infrastructure.

‘I do think there is absolutely a role for retrofitting what we have built,’ said Steve.

The government has put forward proposed changes to planning law in the Planning Reform White Paper.

Transport for New Homes believe that planning reform will be crucial to tackle the transport issues we face around housing developments, but they are concerned that the proposed changes do not sufficiently address the role planning plays in transport solutions, and that the funding currently in place will not allow for barriers to sustainable transport to be addressed.

Steve Chambers said: ‘We don’t think as it stands that [planning reform] is going to make much of a difference at all. One of the biggest issues almost is not planning itself or the rules of planning as such, one of the biggest issues is the funding for transport interventions that has either got to come from the developer, or the taxpayer, the local authority, or a combination of them. It has got to come from somewhere, a lot of these problems would disappear if there was enough money to do it.

‘I don’t see any tools there to ensure that a development is not going to get consent unless good public transport or good sustainable transport is delivered. I think it will be a continuation of what we have now.’

You can learn more about their campaign to include transport solutions in planning reform here.