A consultation draft of the LES was approved by the York Cabinet last month and has now been made available for public viewing and comment prior to formal adoption in September 2012.

The document is of both local and national interest, with much of the development work funded by the Low Emission Strategies Partnership (LESP) in support of York’s role as a regional low emission champion (a role shared with Leeds City Council). 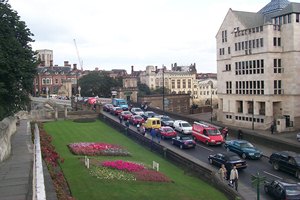 Adoption of the LES strategy is expected to make York the first local authority in the country to adopt such an approach to emissions. The draft LES sets out the further measures which the city council intends to take to reduce emissions of greenhouse gases and protect residents from the harmful effects of local air pollutants.

Targets for both CO2 reduction and local air quality improvement still remain a major challenge for the city.  Two Air Quality Management Areas (AQMAs) already exist in York with a third to be declared later this month.  The main source of air pollutants in the city is traffic.

Cllr Dave Merrett, cabinet member for city strategy, said: “Based on national estimates up to around 158 people die prematurely in York each year due to the impacts of poor air quality.  This is more than the estimated combined impact of obesity and road accidents together, showing the seriousness of this issue.   Poor air quality puts people’s health at risk, creates an unpleasant environment for visitors to the city, may damage historic buildings and places an additional financial burden on local health service providers. It’s crucial that we step up our efforts to address this issue.”

A spokeswoman for the city council said that in recent years this has resulted in lower levels of traffic in the city centre but emissions from the remaining traffic, including lorries, buses and taxis remain too high.  She explained: “The LES seeks to reduce emissions from the remaining vehicles by improving standards of vehicle maintenance, encouraging more energy efficient driving and providing incentives and infrastructure to enable the uptake of lower emission vehicles and fuels.”

And, the spokeswoman noted that: “Many of the principles in the York LES are based on the DEFRA / LESP ‘Low Emission Strategies Good Practice Guidance’ (2010) but the York document takes the LES concept a step further by moving outside the boundaries of new development and applying LES principles to a wider range of activities such as marketing, land use planning, fleet management, procurement, transport planning and economic development.  The LES has been fully integrated into other York policies such as LTP3, the emerging LDF and the Climate Change Framework and Action Plan (CCFAP).”

Some of the measure proposed in the ‘overarching’ LES for York include:

Once formally adopted the measures in the LES will be delivered through a new Air Quality Action Plan for the city (AQAP3). The consultation document for comments is available at www.york.gov.uk/consultation/