Boris Johnson has been slammed by the London Assembly for an “abject failure to tackle the biggest environmental challenges facing London” such as air pollution and carbon reduction.

In a motion passed at a full meeting of the London Assembly yesterday (November 5), Members called for the Mayor’s planned ultra low emissions zone (ULEZ) from 2020 to be expanded to encompass a wider area than the current proposed boundaries based on the Congestion Charge zone. 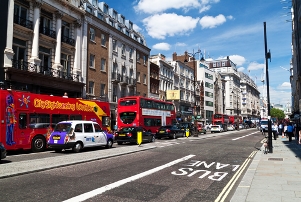 The London Assembly is an elected watchdog for the capital made up of 25 Assembly Members – 12 Labour, nine Conservative, two Liberal Democrat and two Green Party.

And, passed by 15 votes to nine, the motion states that the Assembly is “disappointed” by current ULEZ proposals and urged the Mayor to set a target date for a “total ban on polluting vehicles entering central London”.

Assembly Member Stephen Knight commented: “There is a chasm between the initial plans for the ULEZ and what is now being put forward by the Mayor. Only last year the Mayor’s 2020 Vision stated that his plan for a ULEZ would restrict central London only to those vehicles which have zero or near-zero tailpipe emissions.

“Sadly the Mayor has dropped this commitment and seems content to allow highly polluting vehicles to enter central London for many years to come.”

It is also noted in the motion that the Mayor “rejected calls to use his 2014-15 budget to retrofit London’s bus fleet with the latest emission reducing technology, which could significantly improve air quality in the capital”.

The Mayor and TfL, meanwhile, claim London’s vehicle retrofitting programme is the largest in the world, with plans to bring the total number of buses fitted with the bespoke technology up to 1,800 (see airqualitynews.com story).

However, the motion passed yesterday states: “This Assembly denounces the Mayor for his abject failure to tackle the biggest environmental challenges facing London. On every single issue from air pollution to carbon reduction and decentralised energy, the Assembly is appalled by the toxic environmental legacy the Mayor will leave Londoners.”

Elsewhere, the motion attacks the Mayor’s record on energy security, claiming that Mr Johnson is missing targets on decentralised energy capacity and that his support for fracking is “symbolic of his regressive approach to London’s environmental challenges”.

On fracking specifically, the motion states: that the London Assembly “does not support any fracking activities within the boundaries of “Greater London”.

The motion states: “This Assembly calls on the Mayor to use his remaining time in office to re-focus his efforts and ensure the GLA’s environment team have the resources necessary to make London a more sustainable city.”

The motion was the second passed yesterday after another calling for more pedestrian-only days on Oxford Street to cut pollution (see airqualitynews.com story), was proposed by Assembly Member Murad Qureshi.

He said that Londoners would “never forgive the Mayor if he doesn’t put right this mess before leaving them for the bright lights of Westminster”.

Mr Qureshi added: “When the Mayor came to office his rhetoric and hyperbole were unparalleled. I’m going to “make London the greenest city in the world” he said. Six years and lot of broken promises later, we have illegal air pollution levels which prematurely kill thousands of Londoners, a cold homes crisis as people are told to put on extra layers to beat the rise in fuel costs and a serious threat that the lights might go out if London can’t generate more of its own energy. London is and should always be a no-fracking zone.”