The UK government can be ordered by national courts to draw up a plan to meet EU nitrogen dioxide limit values as soon as possible, the Court of Justice of the European Union (CJEU) ruled this morning (November 19).

The ruling is part of a case brought by campaign group ClientEarth against the government over its failure to meet air quality limits in a number of areas of the UK, or to apply for a postponement of the deadlines in order to draw up a plan to meet these EU legal limits. 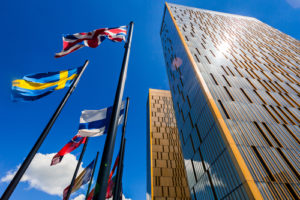 The Court of Justice of the European Union in Luxembourg

It is the CJEU’s first ever ruling on the effect of the European Union’s Air Quality Directive, which establishes a set of legal limits and target dates for reducing air pollutants, including nitrogen dioxide.

Under current government plans, the UK is not expected to meet these legal limits for nitrogen dioxide in three zones – Greater London, West Midlands and West Yorkshire urban areas – until after 2030. This is 20 years later than the original EU legal deadline.

ClientEarth’s case was heard by the UK Supreme Court last year, which ruled in May 2013 that the UK was breaching EU air quality limits. It then asked the CJEU to rule on whether national courts can force governments to comply when they break EU law (see airqualitynews.com story).

Today’s CJEU ruling establishes that it is up to the UK courts to take ‘any necessary measure’ to ensure that the government establishes a plan to meet air quality deadlines in EU directives – where they have been missed – as soon as possible.

However, CJEU also notes that establishing a plan ‘does not mean that the Member State concerned has entirely satisfied it obligation under the directive’. 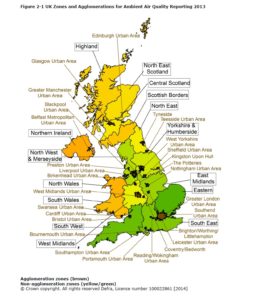 Published this morning, the CJEU ruling states: “Where a Member State has not complied with the limit values and has not applied for a postponement of the deadline in accordance with the prescribed conditions, it is for the competent national court, should a case be brought before it, to take, with regard to the national authority, any necessary measure, such as an order in the appropriate terms, so that the authority establishes the plan required by the directive to ensure, in particular, that the period during which the limit values are exceeded is as short as possible.”

The case will now return to the UK Supreme Court for a final ruling next year, when judges will apply the CJEU’s ruling to the facts in the UK case.

And, today’s CJEU ruling means that the UK Supreme Court could order the government to draw up a new air quality plan in order to meet nitrogen dioxide limits in a much shorter timeframe than its current projections