Fife council has taken delivery of two dual-fuelled hydrogen and diesel powered refuse collection vehicles, in what is being touted as a first of its kind scheme anywhere in the world.

The vehicles have been converted to use hydrogen fuel as part of the Levenmouth Community Energy Project (LCEP) – which aims to establish the region as ‘one of Europe’s largest fleet of hydrogen dual-fuel vehicles’ – aimed at improving air quality across the region. 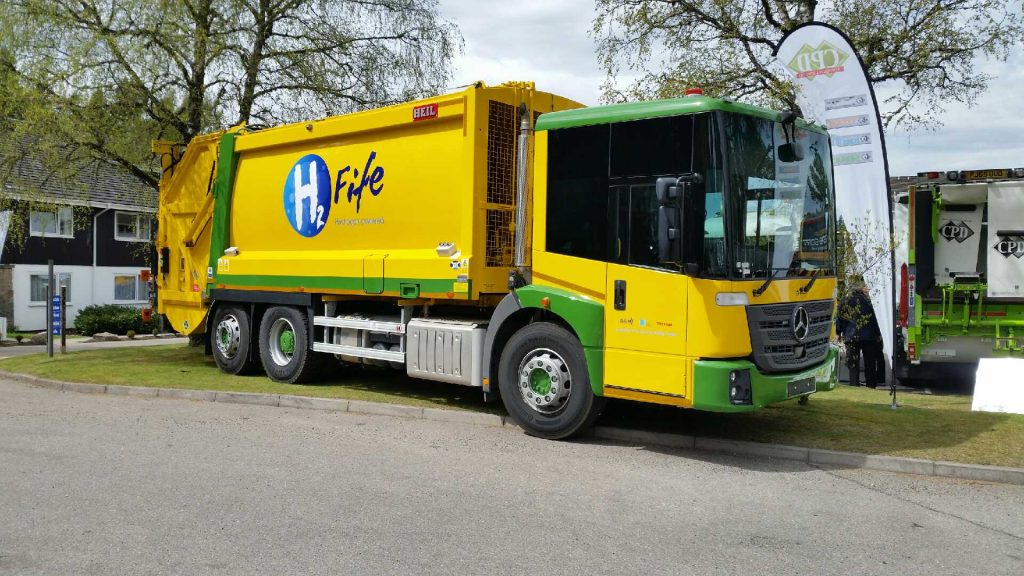 The 26-tonne Mercedes Econic refuse vehicles are powered via a combination of hydrogen and diesel mixed in the engine manifold, with hydrogen stored in supplementary fuel tanks installed underneath the vehicle.

According the vehicle supplier, the collection vehicles have also been fitted with technology that significantly reduces noise as well as improving fuel efficiency during loading and packing. And, the vehicles are expected to deliver reduced carbon emissions’ and improve air quality along collection routes.

The conversion work was developed by Revolve Technologies and carried out by Merseyside low-emission vehicle specialist ULEMCo.

Funding for the Levenmouth project came through £4.3 million in grants from the Scottish Government’s Local Energy Fund. This has contributed in part to a £1.5 million contract with vehicle supplier Heil Farid for nine refuse collection vehicles to be deployed by the council, two of which have been converted to use the hydrogen fuel.

Cllr Lesley Laird, deputy leader and executive spokesperson for economy and planning at Fife council, said: “Fife is leading the way in clean energy. We envisage Levenmouth Community Energy Partnership becoming home to one of Europe’s largest fleet of hydrogen dual-fuel vehicles. I want to thank the partnership for all their hard work bringing this innovative project to life.”

The council is also taking delivery of five Ford Transit vans to run on dual-fuel diesel and hyrodgen, and 10 Renault HyKangoo vans, which use a hybrid electric and hydrogen fuel cell to run across its fleet.

Hydrogen refuelling points have been set up at Fife’s Energy Park and at the council’s Bankhead vehicle depot.

Amanda Lyne, managing director of ULEMCo, said: “This is a global first for hydrogen vehicles and a really great example of the innovative approach that is needed to deliver the low carbon and low emission vehicles of the future.”